Having a garden is nice, but it is high-maintenance.

There are so many bad things that could happen in your garden or yard; you have to be ready for them when the time comes. One of such things is pest infestation.

Every now and then, there are cases of pests feeding off garden plants. This situation has left many garden owners with low yields or even bankrupt.

However, people are becoming wiser and have started investing in pest control so that rodents, insects, or animals feeding off plants won’t have the opportunity to do so.

One of the harmful garden pests that have gained recognition is the Vole.

This article aims to answer questions about garlic cloves as a good repellent for voles and provide other techniques or methods to discourage voles from a farmyard.

How to Identify Voles?

Before getting into details about vole control, it is essential to describe what Voles are and identify them.

A Vole is a small rodent that lives underneath the ground – vole tunnels. It is a small mammal but can cause massive destruction to plants as they feed off them. 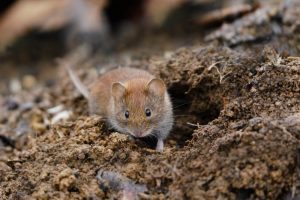 Because of its size (critters grow between 5 to 7 inches), it is almost impossible to detect – most times, the only way you would know you have a vole infestation is after you’ve seen the damage it has done to your garden.

It might also be challenging to identify voles because they look almost the same as moles; however, they are different. Voles have a potato-shaped body, small snouts, short claws, tiny feet, and short tails. They also have short hair and are identified by their brown or black body and darker belly color.

Likewise, voles can be identified with their sharp teeth, making it possible for them to chew on plants effortlessly. Other features of this little rodent include small eyes, round ears, and short fur.

Voles are also called meadow mice. They share certain similarities with regular mice but are different in some ways. 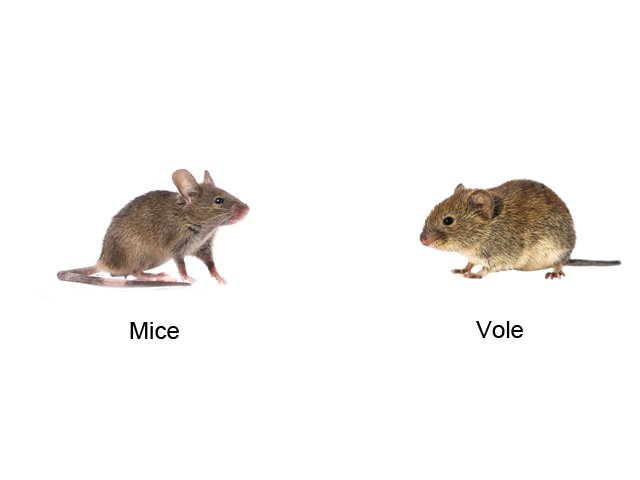 For instance, voles and mice are two almost-identical animals because of their size and fur color. However, meadow voles have shorter tails, smaller ears, and larger eyes than real mice.

Also, a significant difference between them is that a mouse lives and runs around your house, while a vole lives underneath the ground in a garden.

There is also a likely difference in their diets.

People often mistake voles and moles for each other – probably because of their rhyming names. However, they are different animals that make tunnels on your farm. 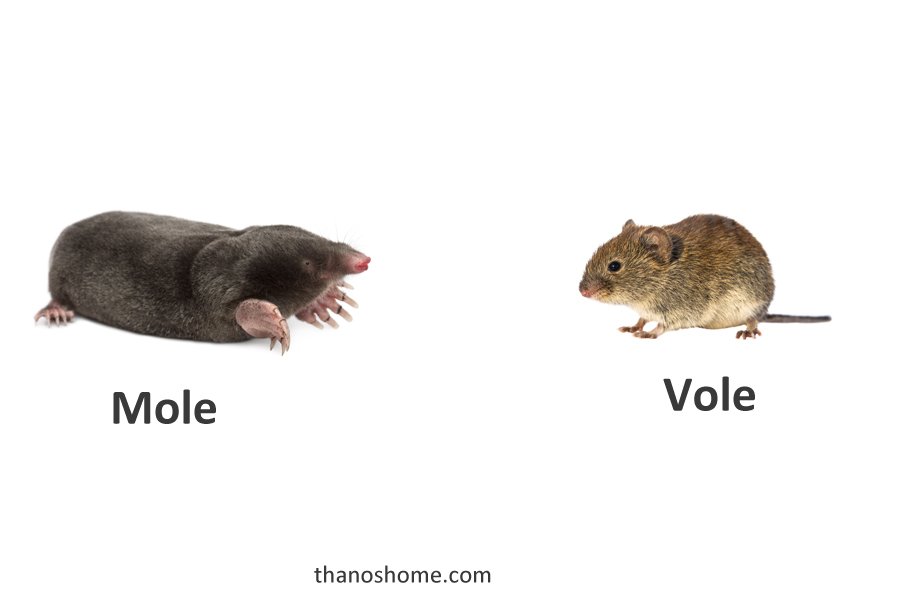 Voles and Moles do not have the same body structure or appearance. Voles have a stocky body resembling field mice, while Moles have big front feet, small ears and eyes, and a long nose.

Also, a major significant difference between them is their diet. Moles eat earthworms and insects. On the other hand, Voles eat fruit trees, grass roots, dead grass – they have a mainly vegetarian diet.

How to Identify Vole Infestation?

By understanding vole population growth, you might be able to tell if the effect on your garden is severe or not. That would also help you make more sense of the situation and deploy whatever method to eliminate voles.

If you notice the following signs on your yard, you have a vole problem.

One of the most common signs of voles in a garden or yard is the presence of irregular surface paths. They are animals with irregular movements but more on dead grass, clipped or trampled sole. They often leave tracks about 1 to 2 inches wide.

Another way you can tell if there are voles in your veggie garden is if they always make clean, round holes as entry points for tunnels.

These entrance holes always correspond with surface runways, showing how smart and fast they are. Typically, the vole holes’ diameters are always around 1 1/2 inches.

Apart from creating tunnels, you can tell if voles are in your garden if you have fruit trees.

One of the things voles love is fruits. They feed on the root, causing girdling. And as vole damage around the root causes girdling, there is a good chance that fruit production becomes abnormal, delayed, or even stopped.

Destroyed or Gnawed Barks and Stems

Another thing voles love that indicates their presence in your garden is tree bark and stem.

Voles eat these tree parts and make irregular gnaw marks on them. These marks are averagely 1/8 inch wide and 3/8 inch long and often appear at the tree bottom.

Knowing the threat voles pose to a garden with young trees and fruits, finding a solution is always the following line of action.

There are many recommendations of what to use. However, one question that has always been on people’s minds is: “can garlic deter voles?”

The answer is Yes.

Garlic is a natural repellent often used to keep pests off plants, including ground squirrels. It is applied directly on vegetables flowering plants as garlic tonic. The essence is to let the smell discourage voles and protect young trees from pest attacks.

To use garlic to get rid of voles and other pests, here is a step-by-step guide on how to do that.

Step 1: First, get your garlic cloves peeled and crushed into minute pieces to be used maximally.

Step 2: Add some of the crushed garlic into the vole tunnels. The pungent odor makes voles leave the area and move somewhere else – however, you are about to make that impossible for them in your garden.

Step 3: Prepare garlic tonic to spray on plants. You can do this by adding warm water to the crushed garlic and leaving for some minutes until it cools. Afterwards, remove garlic from the water. Make soapy water with soap and garlic water inside a spritz spray bottle. Shake slightly and start applying on your plants or young trees.

This garlic water technique should deter voles permanently from your garden.

Other Methods to Deter Voles Permanently?

Interestingly, Garlic isn’t the only way to deter voles permanently; there are other methods. It is essential to consider any of these techniques beforehand because to get rid of voles might just be difficult.

One of the techniques that can be used to deter voles in a garden or farmyard is live traps or baits. Trapping voles with peanut butter is quite effective because you have a chance to control their population on your property.

You can invest in live vole traps, glue traps, or bait traps – they are very affordable. The live trap catches them, and make sure they can’t leave until you release them. They are much better than inhumane traps that only mess up the whole situation, where you find it almost impossible to relocate them.

Another thing you could try out is to redesign your yard or garden so that it becomes inhabitable for voles. You can do this in various ways:

Fencing Around Your Garden

Voles live underneath the ground, but they conduct all their operations on the surface. Creating vole tunnels with surface runways gives them easy access to plants. However, you could stop them in their tracks by building a fence around your garden.

These pesky creatures rely on vole tunnels because they cannot climb fences. You can construct your fence to have depths between 6 to 10 inches before raising it 12 inches above ground level. That would prevent them from tunneling or creating vole runways.

You must know traditional fencing doesn’t stop them from creating vole runways, so you should consider the bury-deep method.

Another way you can alter vole tunnels and vole runways are by investing in irritants – spraying them into/along these areas will discourage them from settling in your garden.

Irritants or deterrents that could work are garlic powder, castor oil, onion powder, cayenne powder, nitrogen fertilizer, coyote urine, and ammonia. They also work to keep other rodents away from your garden.

The application method often involves mixing the deterrents with soapy water in a spray bottle and applying.

Additional security you could provide to your garden is adding gravel in planting holes. It is no news that voles reach plants through wet soil by burrowing deep and creating surface runways. This has been confirmed from the tracks they leave and the presence of small, round openings in the ground.

However, you can stop them by adding gravel, especially if you have bulbs. You want to make sure they stop eating bulbs at all costs, so what better way to do that than limiting access underground?

Young trees are a food source for voles. These animals are so interested in them at your own detriment. Therefore, your only priority should be to protect young trees using effective pest control methods.

One of the methods commonly used is wrapping with light colored tree guard. This tree guard should serve as protection for the tree’s base so that voles won’t be able to get to it.

However, it would be best if you made sure this tree guard is tall to get above the snow line and loose so that it doesn’t restrict the tree’s growth.

You can also deter voles by using a predator-pest control method. That means you would have to deploy a predator like an outdoor cat or dog to keep these small rodents off your property.

Naturally, cats are predators for rodents like voles, mice, moles, etc. They are brilliant and effectively perform to make sure voles leave your garden.

On the other hand, dogs may not be as effective as cats in searching for voles, but they can be considered an alternative.

After seeing enough gnaw marks, finding effective solutions would be the only thing you are concerned with. One other method you could try out is using Thanos sonic vole repellents. 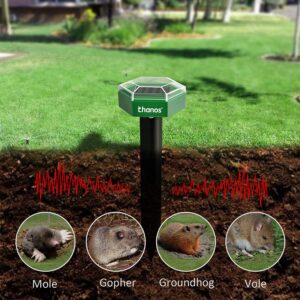 Repellents are somewhat like irritants because they prevent voles from establishing a base in your yard.

As a matter of fact, many repellents contain natural components that would eliminate voles forever – for instance, castor oil, fox or coyote urine.

Do I Need a Professional to Get Rid of Voles?

Vole infestation can put you in a really bad spot because your plants would constantly be disturbed by these pesky creatures. You could experience low yields because of their presence in your garden.

However, if you discover you have a situation like this, you shouldn’t dwell on the problem; instead, you should look for quick solutions.

Now, you can get rid of voles all by yourself by trying out the various techniques already listed above, OR you call a professional – a wildlife exterminator. Sometimes, people call professionals if the problem is beyond them, or if they need to really use poison baits to get rid of them.

Also, one of the scents that don’t sit well with moles and voles is garlic. By applying garlic water or garlic tonic to your plants, you can successfully nibble voles and other critters out of your garden.

After so much discussion, you would agree that garlic and many other irritants/deterrents can repel voles from your lawn or yard.

The smell is enough to drive them away but it would be reasonable to invest in other methods that would completely keep them off your garden.

One of those worthy investments is Thanos Sonic Vole/Mole/Gopher Repellent. It is an active device that would make sure your yard is inhospitable for these little creatures. Get one today, and you won’t have regrets at all!