How to get rid of moles?

I bet you’d feel terrible if you stepped into your garden one morning to discover that moles have made a mess of your beautiful plants overnight.

As if destroying your garden isn’t bad enough, these pests are also a threat to your well-being. They aren’t afraid to bite and in the process cause infections such as rabies.

To add to that, moles are known to carry ticks, mites, and fleas, all of which are harmful to humans and pets.

Moles are excellent diggers and they spend a lot of time underground, which is what makes getting rid of them a little bit tricky.

So, are you having a mole problem at home?

Don’t fret, we are here to help, as we will be giving you some valuable tips on how to get rid of moles in your garden without the help of a pest control professional.

What Attracts Moles to Your Yard? 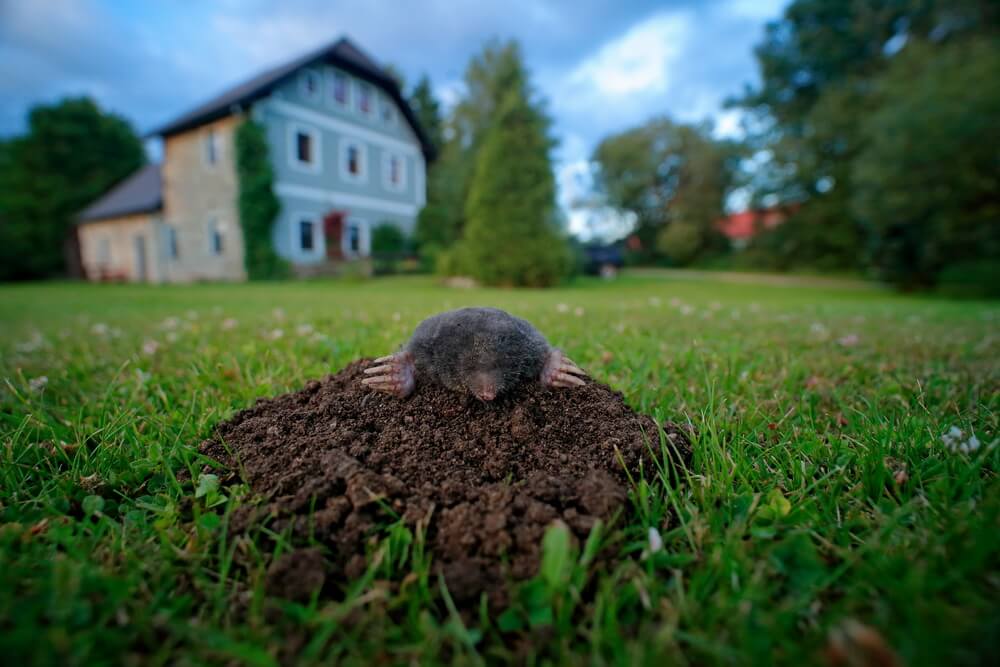 Besides being able to identify the signs of a mole infestation, another key factor in knowing how to get rid of moles is understanding what attracts moles in your yard

Here are the two major reasons why you’ll find moles in your yard.

Moles live exclusively on an insect diet. They love bugs so much that they can eat as much as 100% of their body weight worth of insects per day.

Beetles, white grubs, larvae, and earthworms are among the favorite insects moles eat.

If you don’t control the insect population in your garden, then it will provide a good food source.

A lot of people tend to believe that moles are nocturnal creatures since they are hardly seen during the day. This is not true by any means.

A mole is active during the day, and the reason why they spend so much time in their underground tunnels is that they prefer cool temperatures.

If your garden soil is moist and cool, then they will tunnel there.

How Do I Know There Are Moles in My Garden?

The first step on how to get rid of moles is to be sure they are the ones responsible for damaging your garden in the first place.

It wouldn’t make sense to track down the wrong pest while the main culprit goes free. Keep in mind that the damages caused by mice, voles, and other rodents appear similar to that of moles, which makes it a little bit confusing.

So, what are the specific signs that help you identify the presence of moles in your garden?

This is one of the most obvious signs of a mole infestation. When they dig underground, they rip up the roots of your lawn grass as they go, which in turn leads to the death of the grass on the surface.

If you notice a trail of dead grass (in patches), then you can be sure moles have built tunnels underneath.

As moles travel underground, they dig into the soil and push it up to the surface. As you would expect, the excavated soil gathers up at the entrance of the mole tunnel and forms a heap known as molehills. 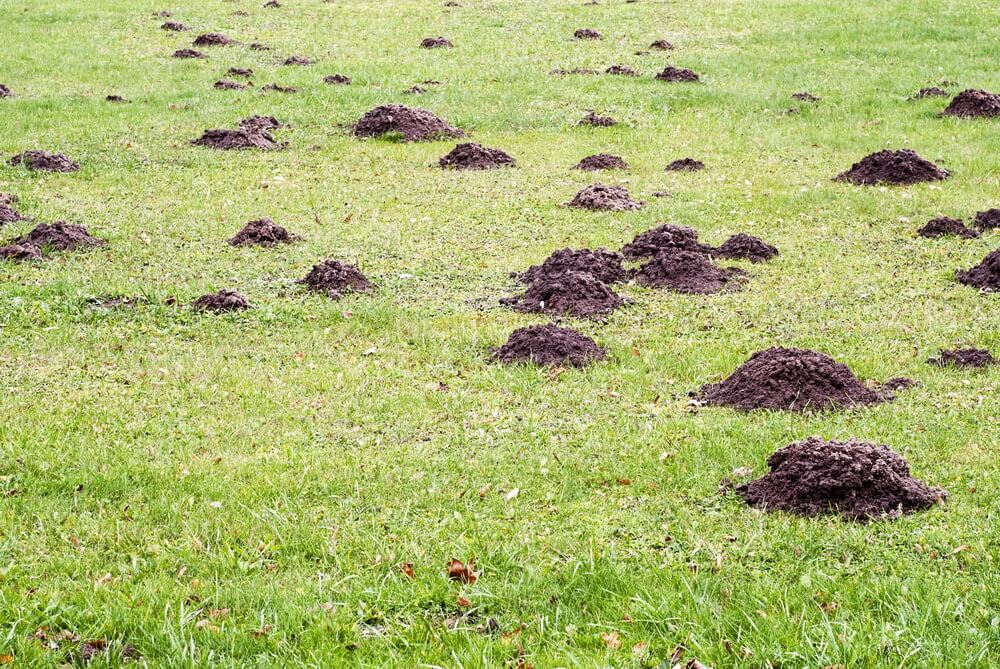 3. Mounds That Are Far Apart

A gopher mound can easily be confused with a mole mound, but the main difference lies in the distance between the mounds.

Gopher mounds are usually located close to each other, while mole mounds are located about 6 feet away from the next.

Unlike Gophers who pulverize soil into a fine powdery form, a mole tends to dig up the soil in chunks. This sign can easily tell you that there are moles, not gophers in your garden.

How Do I Get Rid of Moles in My Yard Naturally?

Using toxic pesticides to kill moles is one way, but the use of home remedies is the best option, as it poses no threat of chemical poisoning.

Here’s what you can do.

There are certain natural smells that pests cannot stand, and you can use them in mole remediation.

Citrus oil offers a natural scent that many pests hate, and our little friends hate it too.

These repellents should be regularly used in adequate amounts for best results.

Moles are skilled diggers and can go very deep into the soil, which is why these repellants must be used generously. 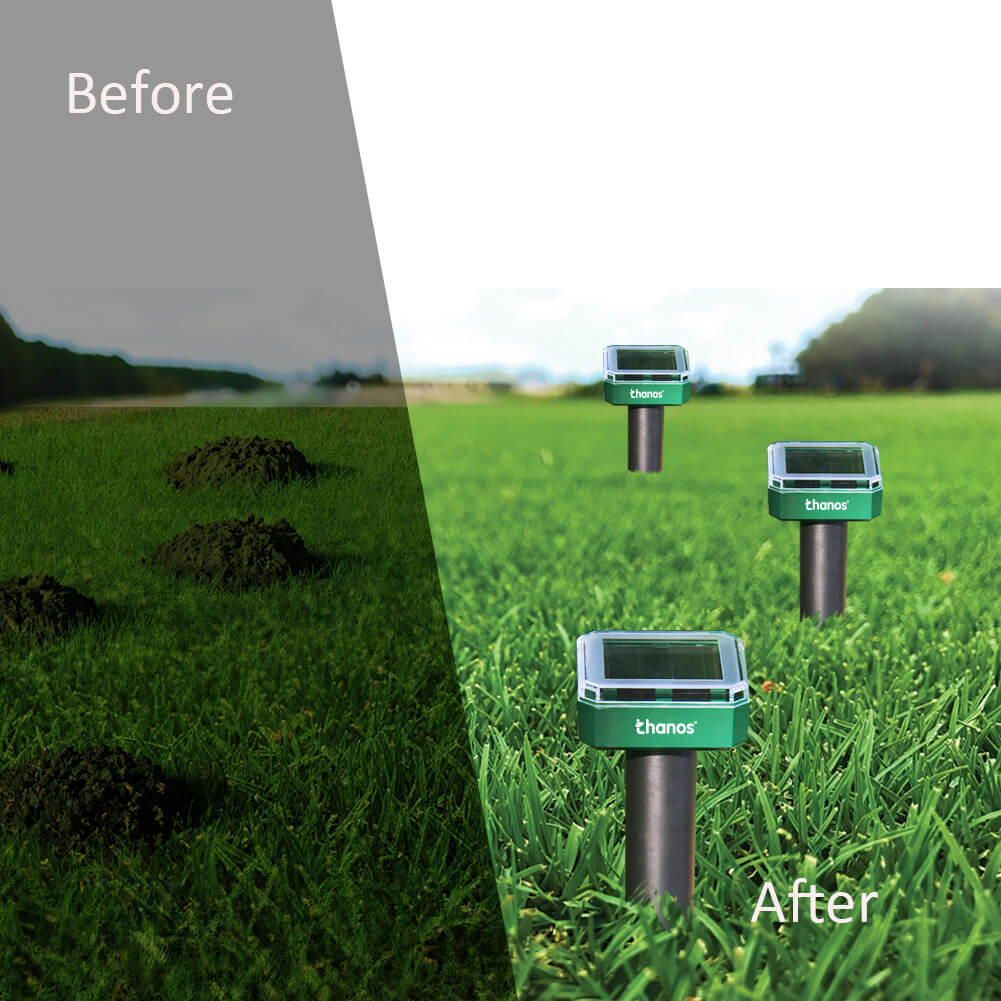 Castor oil is among the best home remedies you can try, so they will avoid environments that are laced with it.

Tar can also be used to deter moles. All you have to do is get small pieces of wood, dip them in the tar, and place them where the molehills are located. You can also set them into the entrance of their tunnels.

Other natural mole repellants include –

Moles will leave once these smells are abundant in your garden.

As I have mentioned earlier, moles live on a diet of grubs and earthworms and will dig around your Garden in search of them.

Earthworms, grubs, and crickets offer adequate nutrition for these pests, and if they have large populations in your garden, they will come digging.

What you need to do is simple – Reduce the insect population in your garden and the moles will search for food elsewhere. This is probably the most natural way to get rid of moles.

There are many natural ways to control the insect population in your yard. You can spray beneficial nematodes to kill the worms in your lawn.

Another useful tip is to avoid using too much water on your garden plants. Water moistens the soil, which in-turn makes it more inviting to grubs and worms.

Use just enough water on your plants, and never in excess.

You can also install a drainage system in your garden to channel standing water away, as this will significantly reduce soil moisture.

Lastly, you can introduce some natural predators to eat the insects in your garden. Frogs, lizards, and certain bird species can help you with this.

Just like every small animal on Earth, a mole is also afraid of being eaten by larger prey.

With this in mind, you can get a dog or cat to roam around your garden. These pets can chase and kill moles in your lawn or garden.

They will feel threatened at the sight of these pets and will no longer be comfortable in your garden.

How Do You Get Rid Of A Mole Overnight?

If you need an instant remedy for moles, then here’s what you can do to get rid of them overnight.

A mole trap is one of the most effective ways to get rid of moles in your yard. The mole trap doesn’t just confine them, it kills them as well.

You can find an above-ground or below-ground trap in any garden maintenance shop. They also come with user manuals that guide you in its use.

Set the traps in areas where they are most active for better results.

I have to mention that these mole traps are prohibited in some areas since it kills the moles. This is why you need to inquire before using them. Get a permit if need be.

Since we know that moles feed on insects, you can use poison baits to kill them overnight.

These take the form of worms and grubs, which moles like to eat. Once the food is placed in areas of high mole activity, they will be lured to eat them and die in the process.

For the sake of being humane, you can set poison-free food in a trap, which will shut as soon as the moles enter to eat them. This will only trap the mole, but won’t kill it.

Check the trap in the morning and call a pest control service to take them away.

You can set store-bought gas bombs by the entrance of the mole tunnels. Set it off and allow the poison to kill the moles overnight.

Keep your pets indoors all through the night so they won’t be affected by the bomb.

Getting rid of moles may be tricky, but certainly not impossible. Use the tips provided in this article to control the mole population in your yard.

But if you’re not one to handle the dis-infestation yourself, then you can call a pest control professional to do that for you.

We hope this article on how to get rid of moles has been helpful.