How to get rid of moles in the garden?

Having a garden can be a great addition to your space. Apart from adding beauty to your home, it can also help you keep your mind busy and relaxed after a busy week.

But what happens when unwanted pests are ravaging your beautiful lawn like moles?

Moles are part of the unwanted guests that can tear up your garden. These rodents are known for creating deep, extensive tunnels that can make your garden look unattractive. In addition, mole damage affects your garden plants.

So, how do you get rid of moles in your garden?

How Do I Identify A Mole?

Moles are rodents. This is usually the first thing you would notice about them.

They have tiny eyes (which causes poor eyesight) and long, characteristically hairless snouts that give the rodent an acute sense of smell. Their ear canals are hardly visible due to fur.

Although moles are 6-8 inches long, they can build extensive tunnel networks below your soil in a few days. Their black, extra-smooth fur doesn’t trap dirt like normal fur. Some species even have fur that stays completely upright, so no soil particle stands a chance to stick.

Moles have long ‘fingers’ positioned naturally in front of them. It’s these claws they use to cause so much havoc in your garden.

Moles are fantastic diggers and can dig about a hundred feet in just one night. These claws are assisted by equally big teeth that help the moles cover more digging ground.

Moles eat insects, beneficial nematodes, and larvae, meaning they don’t feed on plants. So why do they dig your garden? Most insects like earthworms live below the soil’s surface, which is warm and moist.

When Can I See A Mole?

Moles love to come around when the soil is cool and moist such as early in the morning or late in the afternoon when the sun isn’t too hot. It’s hard to see moles during the summer or winter because they prefer moist soil.

You would easily see moles during early spring or spot a lot of damage during this period because they are very active.

Are Moles Any Good?

But moles are not all that bad.

These 4-ounce creatures can improve the drainage in the soil, add fertilizer and allow for better aeration. However, when they damage your plants and trees, it’s time to look for how to get them off your property.

Will Moles Get into Your House?

No, moles prefer the outdoors and won’t get into your home to seek food.

However, if a curious mole finds its way into your house, you can chase it away or use a humane trap to catch it.

It would also help inspect your home for any mole droppings or fur as these can trigger allergies or pass on rabies, ticks, and fleas.

The ideal approach would be to disinfect your home or call a pest professional to ensure your home is safe.

How to Identify Mole Tunnels

Now, you might see one mole in your garden, but if it does not exist, you might be wasting your time trying to eliminate it. One sure way to know you’re dealing with moles is to look for mole tunnels or signs of mole damage.

Mole tunnels are usually underground, but you can spot raised tunnels or mounds that look like volcanoes around areas where they have dug. These mounds are how moles enter and leave the soil. 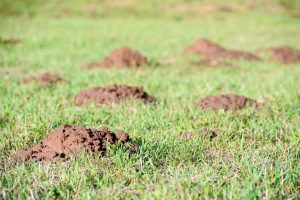 Moles can be very funny with their tunnels. For example, a mole might dig up a tunnel today but decide it will not use that again. So what does it do? Dig up a new one! As some people call them, tunnels or molehills can be tens of feet long.

You might have just a mole in your garden, but the extensive tunnel network you discovered might be giving you second thoughts. Moles are usually solitary creatures, except when they need to mate.

Moles can destroy seedlings, plant shoots and ultimately damage small plants. Therefore, it’s best to deal with a mole problem before it snowballs into something worse, like a full-blown mole infestation.

Imagine how your garden would look!

What Is The Fastest Way to Get Rid of Moles in Your Yard?

Trapping is the fastest way of getting rid of moles in your yard.

Because, unlike other methods that take time or might be dodged by the moles, trapping is usually quick and effective.

There’s no need for you to wait for a few days or weeks to see results. If you don’t want to kill the moles in your garden, you can opt for humane traps that catch them without causing any physical damage.

You don’t have to buy a lot of traps because moles are not social animals. The best place to keep a mole trap is in one of the tunnels. The mole would quickly be caught in the trap as it burrows across your garden.

Instead of placing traps along curved tunnels, please put them in straight tunnels to catch moles better. Then, you can release the mole into the woods, or a nonresidential area after seeing it, so they don’t get into someone else’s garden.

What Other Alternative Mole Repellents Can I Use?

Since you can’t use harsh methods to eliminate moles in most places, you can use a mole repellent to make your garden unattractive to them.

Here are some examples of such repellents:

All flowers of the allium family, including daffodils, marigolds, fritillarias and garlic, all do an excellent job of keeping moles away. Plant these flowers on your flower beds or around areas where you notice a high amount of mole activity.

You would notice that the moles don’t come close to these areas after a while. Be careful not to use castor beans or daffodil bulbs as they might repel moles, but they can be toxic to kids.

Sonic devices make use of high-frequency sounds to chase away pests. So now, when looking for an ultrasonic repellent for moles, it’s best to get one like a spike that makes both audible and ultrasonic sound.

Thanos solar sonic mole repellent can help you to get rid of the mole efficiently. You can buy it by clicking here. 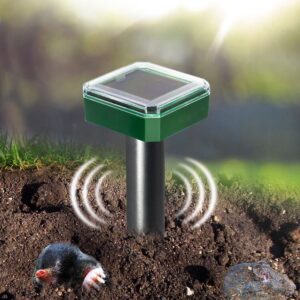 This is because moles are sensitive to vibrations and will scamper at the sound of small vibrations. Place your preferred ultrasonic device close to raised ridges or molehills.

Another home remedy that can be used on moles is castor oil.

Although people have different opinions on whether it works, the truth is that this oil does not get rid of moles immediately.

But, it causes digestive problems for moles anytime they feed on an insect sprayed with castor oil on your garden.

With time, the mole would not like to stay on your property because of constant tummy issues and look for somewhere else to disturb.

To use this oil, mix it with dish soap in the ratio of 3:1. Alternatively, you can combine 15 ml of this natural oil with 5 ml of liquid dish soap.

You don’t need a lot, just a small quantity you could mix with half a gallon of water. Then, spray your entire garden with this mixture, and the moles will reduce.

Is It Illegal to Kill Moles?

The answer to this question is quite tricky. In some American states like Washington, D.C., it is illegal even to use traps that grip moles firmly, talk less of killing them.

On the other hand, in some states like North Carolina, you can kill a mole based on certain conditions. For example, you might need to get a depredation permit and other documents like a license.

So, to be on the safer side, you should opt for methods like the home remedies we listed above to chase away moles. Then, the moles would move somewhere else or find another outdoor space with continuous use.

It is easy to get rid of moles once you follow the guidelines in this article. You can use an underground fence to prevent moles from burrowing through your garden. However, mothballs are not a practical solution against moles.

Once you can significantly reduce the insect population in your garden, you would notice that the mole or moles would go away. We hope you enjoyed this article!