How to Get Rid of Hornets?

Hornets can ruin a beautiful summer with their constant buzzing and hovering. But hornets are not all that bad. Like wasps, they are quite beneficial as they help eat more minor insects pests in your garden.

But the fact that wasp and hornet serve as biological pest control agents to eliminate other pests does not mean you want to have them around since their population can quickly grow out of control.

So how do you get rid of these ever-present stinging threats on your yard?

This guide will show you how to get rid of hornets (including ground species) naturally.

But before we go further, let’s see how to identify a hornet and its nest.

Hornets are insects that possess six legs and a pair of wings.

These insects have a stinging mouth part, which they use to harm anything that looks like a threat. Most European hornets are typically 1-2 inches long. They have a reddish-brown color, with yellow rings around their black-colored abdomen.

Some species of hornets may have bigger eyes than others, like the Asian giant hornet. Others like the bald-faced hornet have white circles around their compound eyes. Hornets are much more giant than bees, and unlike bees, they do not have a furry body but a smooth one.

Now that you can identify a hornet if you see one, it’s time to know how their nests look like.

Hornets are social insects, i.e., they love staying in groups. So if you see one hornet flying across your lawn, there’s every chance it has relations pretty close by.

Hornets live in a nest they build for themselves made up of chewed grass. Their nests are the size of a football, with only one ‘door’ or hole. This is where they enter and leave the nest. But as unbelievable as it sounds, up to a thousand hornets can dwell in a single nest. 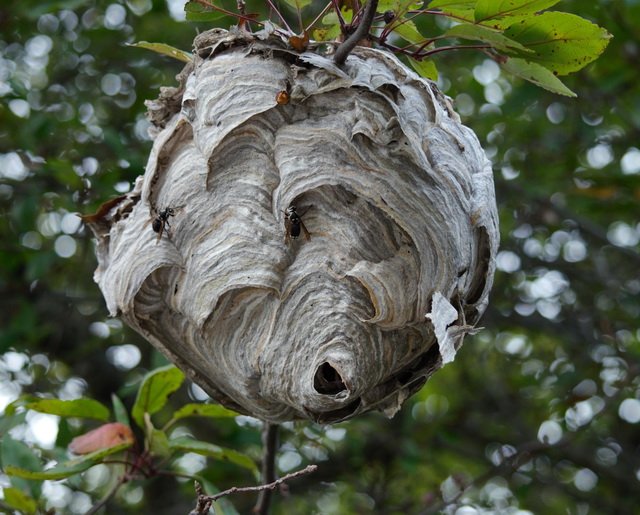 Yes, a giant nest can house up to 1000 hornets. This is the reason why you shouldn’t let a hornet problem get out of control.

The more you let them stay on your lawn, the bigger their population gets. These insects’ nests are usually brown, grey, or reddish, depending on the materials used to construct the nest and the species.

Where can you find a hornet’s nest?

You wouldn’t just find this nest on a tree or lying on the ground.

Hornets like to keep their homes private and will always look for hidden corners to build nests. They can be protective and aggressive about their nests too. So don’t look for their nest in open areas of your house or a tree. Instead, look in hidden corners, eaves, close to the ceiling of your abandoned barn or garage, or well inside a tree in your yard.

These nests could be located on walls, the roof, or could stand alone. The stand-alone hornet’s nests are easier to eliminate as you do not need to dislodge them from anything.

But, you have to be careful. Hornets’ nests are no child’s play, and interference with them can result in severe injuries and even death as they can be aggressive. This is why you have to approach their homes with a plan.

Does a hornet sting once?

Firstly, they sting multiple times. While a bee would sting you once and let you be, a hornet would continuously sting you till you are out of sight.

Secondly, a hornet’s sting contains more venom than any other stinging insect. What does this mean? It means if you are allergic to its sting, the results could be fatal.

Thirdly, a hornet’s sting releases a particular kind of chemical called pheromones. Pheromones have different functions, but the ones removed from a hornet’s sting signal other hornets. It passes a message saying, ‘Help, I’m in trouble. Join me to fight this threat.’

This results in multiple stings from multiple hornets! But, of course, nobody wants to experience that, and it’s all the more reason you should get hornets off your environment as soon as possible with the methods in the next section.

What is the best way to kill hornets?

The best way to kill hornets is to spray a long-range insecticide directly on the hornets’ nest. However, as we said, you must have a good plan in place before approaching a hornet’s nest because of the stings.

Here’s how you can kill them with insecticide:

You can’t afford to approach a hornet’s nest with light clothing. You have to put on as much protective clothing as possible, making sure that most of your skin is covered. You can wear a thick piece of clothing like a winter jacket or a long-sleeved shirt. This is to protect you in case you get stung.

Make sure your escape path is clear:

You’re going to attack the home of tens or hundreds of hornets. They won’t be happy about it. Ensure that your escape path from the nests is as straightforward as possible, so you move away quickly.

Nighttime is the best to eliminate hornets because they are less active at that time. Plus, most of them will be in their nests, so it’s easier for you to kill them all at once.

When shopping, check labels to be sure you are getting long-range insecticide. This kind of insecticide can cover a greater distance, and you don’t have to go so near to the nests. Spraying hornet nests is different from spreading a bug: you need to be as far away from them as possible.

Spray the nest as much as you can:

When you are finally ready to attack the nest, spray as much insecticide as you can on the nest. If possible, finish the can before the hornets start coming out. More insecticide increases the chances of more hornets dying. If you can’t spray all your insecticide, keep it for another time.

Check the nest after 24 hours:

Go to the nest’s site after 24 hours and check if you will see any hornets. If you don’t see any hornets around your home, it could mean they are all gone. If you still have insecticide, respray the nest and wait for the next day.

If you still don’t see any hornets, that means your attack was a success. However, if you encounter any, keep spraying every day till they are all gone.

Now that the hornets are gone, it’s time to take off the nest. If they are stand-alone nests, detach them from the trees, as far as you are sure no hornets are inside.

But if it’s attached to something like a building, use a long stick or pole to dislodge it till it falls off gradually. Then, please pick up the nest with gloves as it is probably soaked in insecticide. Ground nests can be picked up quickly.

How do you get rid of a hornet nest without getting stung?

If you can’t eliminate hornets by removing their nests, there are other methods you can use to prevent stinging. These include the use of:

Insect dust is an excellent non-contact method for eliminating hornets. Not only will these dust deal with hornets, but the other insects they feed on—spray areas around your home with insect dust. You can use a pesticide duster to get broader coverage. While at it, ensure you concentrate on the ground and where you notice nests.

This method is suitable for an indoor hornet problem. Use a handheld vacuum or a bigger one if you can manage it.

Next, fill the sac with soapy dishwater, and watch how the solution will drown and kill the hornet inside the vacuum. Set the vacuum head facing the hornet nest or buzzing hornets and leave the room. The pests will be sucked into their death.

Natural methods to get rid of hornets

On the bright side, there are many natural pest control methods to eradicate hornets from your yard without touching the hornets’ nest or using chemicals. Here are two o the best ways:

Dusting with cinnamon or talcum powder:

Use a shop-vac to spread either talcum powder or cinnamon directly on the hornets’ nests or any other place where the hornets like to hide. The chemical will irritate and choke the pest, forcing them to leave your yard.

Pouring hot water directly on a hornet nest is the best pest control solution for ground hornets. However, it’s not advisable to use hot water on aerial nests as you could hurt yourself or damage nearby property.

This pest control method is as easy as heating water to its boiling point and pouring the hot water where the hornets build their nests. Ensure that you leave the premises for a few minutes to avoid being stung.

How do you prevent hornets from coming back?

Trust me; hornets can really be a handful to deal with.

The stress of eliminating them was enough. The last thing you want is another invasion by this pest, which tells us how to ensure the problems don’t come back?

The good news is that some control methods can help you with that.

Hornets are attracted to the smell of your garbage, as it tends to have a fruity scent, especially in the summer. Therefore, keep the lids on your trash cans and tie up any trash bag. Also, ensure you disinfect and rinse your trash cans at least twice a month. This way, there will be no scent to attract them.

Seal up your home

Have you noticed any cracks on your walls and foundation? Then it’s time to seal them up. Hornets love to hide in these cracks, so even though you eliminated their nests, new ones can still find these cracks comfy.

Tidy up your garden and lawn regularly:

Don’t just allow tall grasses and weeds to dominate your lawn. This type of vegetation could attract other smaller insects like aphids and spiders. A well-kept garden will attract far fewer hornets than an untidy one.

From observation, most hornets like to nest in unpainted areas of buildings. While the reason for this is not apparent yet, it can help you control them.

So paint up yards and the other regions around your houses, including useless areas, because hornets can build their nest there. Besides the paint serving as some hornet control, they may also help to keep your property beautiful.

You can mimic a hornet’s nest with some pâper maché and poster color or buy one. A fake nest, when created, can deceive hornets into not creating theirs. If they stay in the artificial nest, eliminating them is more accessible than in a real one.

While this is not a robust control technique, it could prove efficient when used with other methods.

Just like bees, hornets are attracted to nice-smelling flowers. These flowers might beautify your garden and bring in compliments from guests, but they can also attract hornets big time.

Thus if you must plant flowers outdoors, ensure you go for something like Hibiscus that does not smell too strongly. This will help to control their activity around your trees and bushes.

You should treat a hornet problem before it snowballs into something bigger. The methods in this article are effective hornet elimination and control methods, so you can be sure they would work.

One vital tip you should never forget when dealing with hornets is: don’t swat them.

Swatting only makes things worse as the pheromones we talked about earlier would be released. Hornets can contribute a lot to your garden ecosystem, but when they become a nuisance around your home, it’s best to take them out. We wish you a hornet-free home soon!