When moles invade your garden, yard, or lawn, there are no limits to the extent one will go just to get rid of these little critters. While they themselves are not such a big danger to your garden and plants, the damage they cause can be very unsightly.

Some studies have shown that castor bean plants are also known as the Ricinus communis have certain properties that repel moles.

The seeds contain a poisonous toxin known as ricin. This toxin not only kills the moles when ingested but also kills the insects which moles feed on. The ricin from the seeds of Castor beans is one of the major reasons castor bean plants are considered mole repellents.

However, it is important to note that castor bean is not the most effective way in getting rid of moles.

Research from the University of Arkansas Extension indicates that chances are the moles may not ingest the castor beans, to begin with. Their teeth are not designed to eat vegetable seeds but invertebrates.

One of the best ways to deter moles from your garden is through natural repellents such as using plants that moles detest.

Besides repelling moles, these plants can be a pretty addition to your yard or garden due to their aesthetic beauty.

You’re now probably wondering which plants moles hate so much that they will be repelled by them – well, here is a list of those plants;

The castor bean plant can grow up to 15 feet tall. The leaves have serrated edges with deep lobes and attractive leaf veins. The seed is pressed to produce castor oil. This plant thrives well in full exposure to the sun and on well-draining loam soil.

Castor bean plants are perennial in warm regions and annual during cold climates. They need a growing season of about 90- 150 days. Water them well during the summer and add fertilizers to low-fertility soil when planting.

The African marigold- the scientific name Tagetes erecta – is one of the plants that deter moles. Marigolds produce carnation-like flowers in summer, spring and fall. They are mostly orange, but possible colors include red and white.

The flowers contain pyrethrins, which repels bugs and insets that moles eat. Essentially, marigolds repel moles by removing their food sources. They also produce a very strong scent that moles do not like. These plants thrive in full sunlight and well-drained loamy or sandy soil. 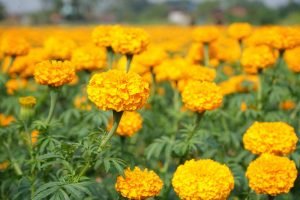 Daffodils is yet another plant that moles detest. These plants produce flowers that have distinctive flowers with petals circling a central cup. They are typically yellow in color but can also be red, orange, or white.

The daffodils flowers and bulbs are toxic to moles hence they will not stay in an area where they are planted. Insert the daffodils in mall runways and flower beds. They thrive in sunlight and are neutral to acidic soil with a good drainage system. 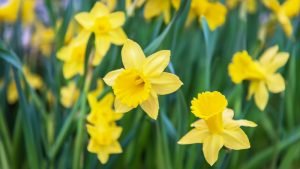 They produced a potent musky stink that overwhelms moles and repels them. Use these flowers as a perennial border around your yard or garden. Plant them in full sunlight and rich well-drained soil, no fertilizer is necessary. 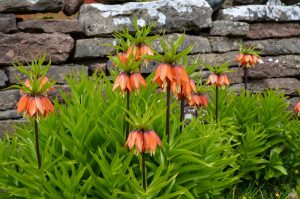 Popularly known as the mole plant, this plant has green seed clusters and blue-green leaves. The whole plant is poisonous and also the roots produce a very pungent smell that repels moles.

Place the mole plants around the border or bed. Be careful when handling the mole plant because the milky-white sap can cause a skin rash. 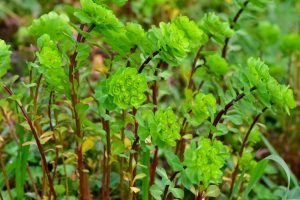 The Allium sativum plant is known for its strong scent.

Malls have a heightened sense of smell hence they are repelled by this strong scent. Plant garlic cloves in full view of the sun and in an acidic to neutral loam soil with a good drainage system. 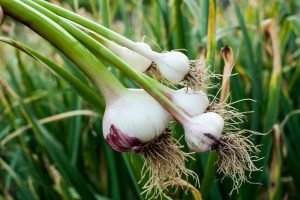 How do castor beans get rid of moles?

We have already established that castor beans get rid of moles, but how exactly do they do this?

Castor beans contain several toxic chemicals but the compound ricin which is a deadly poison is the most dangerous one.

Once the seeds are pressed, all the toxins remain in the seed cake. This means that the castor oil pressed it without any toxins and is safe for ingestion.

The castor beans can be crushed and put inside molehills, mole runways or they can be scattered around an area with more activity.

When ingested by moles, the ricin compound can be very toxic to the moles.

Additionally, the castor plant has a very unpleasant smell that will repel moles when planted in mole-infested areas.

While planting castor beans is a great way to deter moles, using them as bait is even more effective.

Mole love to eat grub worms, you can find commercially produced earthworms that are infused with castor beans. Place these in molehills and tunnels. With time you will notice the number of these little critters reduce.

Can you touch a castor bean plant?

Castor bean plants (Ricinus communis) are known to contain the powerful toxin ricin. This compound is considered poisonous. This plant should be handled with so much care especially the seeds for it is not only lethal to moles but also to humans.

In the event you touch castor bean plants, it is essential that you wash your hands thoroughly with soap and water. It is best to wear gloves when handling them.

While castor beans have properties that will repel moles, do not plant them in an area where children and pets can have easy access to them. Always wear protective gloves when handling castor beans and make sure to wash your hands thoroughly after.