Can Flea Traps Kill All Fleas?

If your home just got invaded by fleas, you understand the discomfort these insects bring to the house. They make your family and pets’ lives miserable because they are many small insects that bite the animal’s skin for blood.

Some homeowners buy harsh and dangerous sprays to get rid of the fleas, which cause allergies and other reactions to the people and pets in the home.

Luckily, flea traps are a more natural method to get rid of these annoying insects.

Flea traps work by either trapping the fleas on glue traps or in soapy water. They then install a source of heat and light over the water or glue and place the trap in the most affected areas by the fleas.

The light and heat source lures the fleas towards the trapas they mimic a warm-blooded animal. When the fleas jump on the light, most of them slide into the water or get stuck in the trap.

These are by far the best ways to make the ultimate flea trap. Commerical flea traps usually use highly effective glue traps whereas you can easily make homemade flea traps using the water method.

The Thanos® Flea Trap uses the scientifically proven and highly effective combination of light and heat to attract insects. Once inside the trap, a powerful glue pad catches and disables them for good. They’ll wish they never invaded your home! 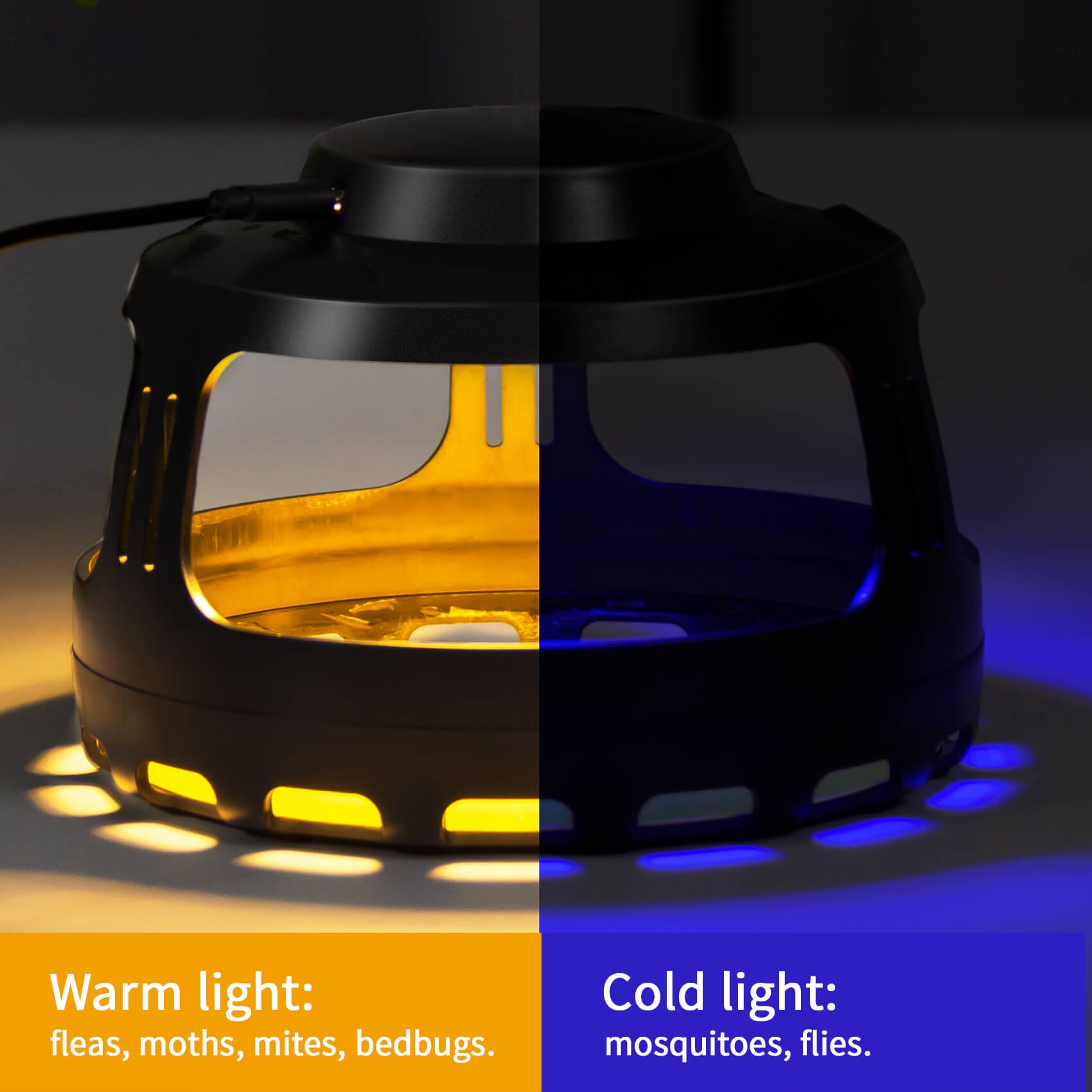 How Effective Are Light Flea Traps?

The light flea traps are effective because fleas are attracted to light and heat. Once you place the light over a bowl, the fleas jump on it and fall on the traps. They get stuck here and die.

However, the light traps are not entirely effective. Only the adult fleas are attracted to the light, leaving the young ones, larvae, and pupa behind. The eggs will later hatch, meaning more fleas in the house.

Homeowners should always place the traps in the most infested areas. If they are in a particular room, you can set the trap together with a lamp or bulb and close the room, to reduce the insects’ movement and direct most of them to the trap.

How Long Does It Take For A Trap To Work?

Making a flea trap is a fast process that could take about 60 seconds to make one trap. Once you finish with the process of making the trap, you should leave it in the affected areas and let it catch the insects overnight, when they are most active.

To attract fleas to one spot, use a candle and a bowl with dish soap. The heat from the candle attracts the fleas because they think it is a mammal. When jumping towards the warm candle, the fleas land in the bowl and drown in the water. You should change the water every day to trap many fleas.

How To Know If All The Fleas Have Been Eliminated

Once you have made or bought your flea trap and followed all the instructions on where to place them, you want to ensure that all the fleas have been eliminated after a month or two. While you can lift your carpet or bedding to see if there are any insects left, there are more accurate ways to know.

If the fleas were mainly on your pet, start by checking them. Place the dog on a white paper or towel and use a flea comb to pass through the pet’s hair. Ensure you get to the skin so that any pests on there can fall.

You should also check other areas like around the toes, ears and armpits, and the tail. Keep checking if you will spot any insects falling on the white paper or towel. If you spot one flea, chances are they are not eliminated.

Alternatively, you can apply petroleum jelly on the flea comb and comb the dog’s or cat’s fur in the opposite direction it grows. The jelly on the comb will pick most of the fleas if present. This is a way to know if the insects have left entirely, and it also helps to eliminate them.

Homeowners have different preferences for flea traps, so they are available in various types. Some of the ones you could buy are:

One advantage you get from having the glue flea trap is you can use it to trap other pests and fleas. This is a cheap and straightforward method to trap fleas that jump on the glue.

You can add light like a candle or bulb on the glue trap to attract more fleas. Most commercial electric flea traps will have the light pre-installed.

This method relies on a little luck to trap many fleas. Homeowners place the trap in densely affected areas like under the bed, near the pet’s houses, and other regions. For many people, this is the best flea trap for effective pest control.

If the glue trap is not working well for you, you can use the water flea traps which work in the same way to control fleas.

You place heat or light sources like a bulb towards the trap. It is because fleas are attracted to heat and light. You can catch many of these pests using this method. These fleas then land in the dish soap trap and drown.

It helps to get rid of the flea problem and they are easy to make at home where you can use a candle for the central light. They won’t capture flea larvae but work very well at trapping fleas and can be used alongside glue traps for a great solution.

While fleas often invade the bedding and pets, they can also be found in other places. These areas are the breeding zones of the insects and the most critical areas that need elimination. Some of the areas to place your flea traps are;

On carpets and rugs

Your pets spend a lot of time on the carpets and rugs, meaning that if they have fleas, they will leave them there. Also, the carpet is almost always warm, making it easier and faster for the eggs to hatch into the larva and then the pupa.

Placing the trap near the carpet helps to eliminate the adult fleas. When they die, there is less hatching of new eggs, reducing the chances of breeding.

If you notice that your pets have fleas, get fast treatment. The pest sucks a lot of blood from the pets and weakens them. Some cause death to the pets. Placing the flea trap near the pet bedding helps trap the extra adult fleas, leading to less pet infestation on the animals.

Around windows and furniture

Fleas are some of the problematic pests to deal with because they hide in minor cracks. If you have noticed fleas hidden around the window frames and furniture, place your trap near those areas. Since the insects are not feeding on anything in the window and furniture cracks, they will come to the trap thinking that it is an animal. 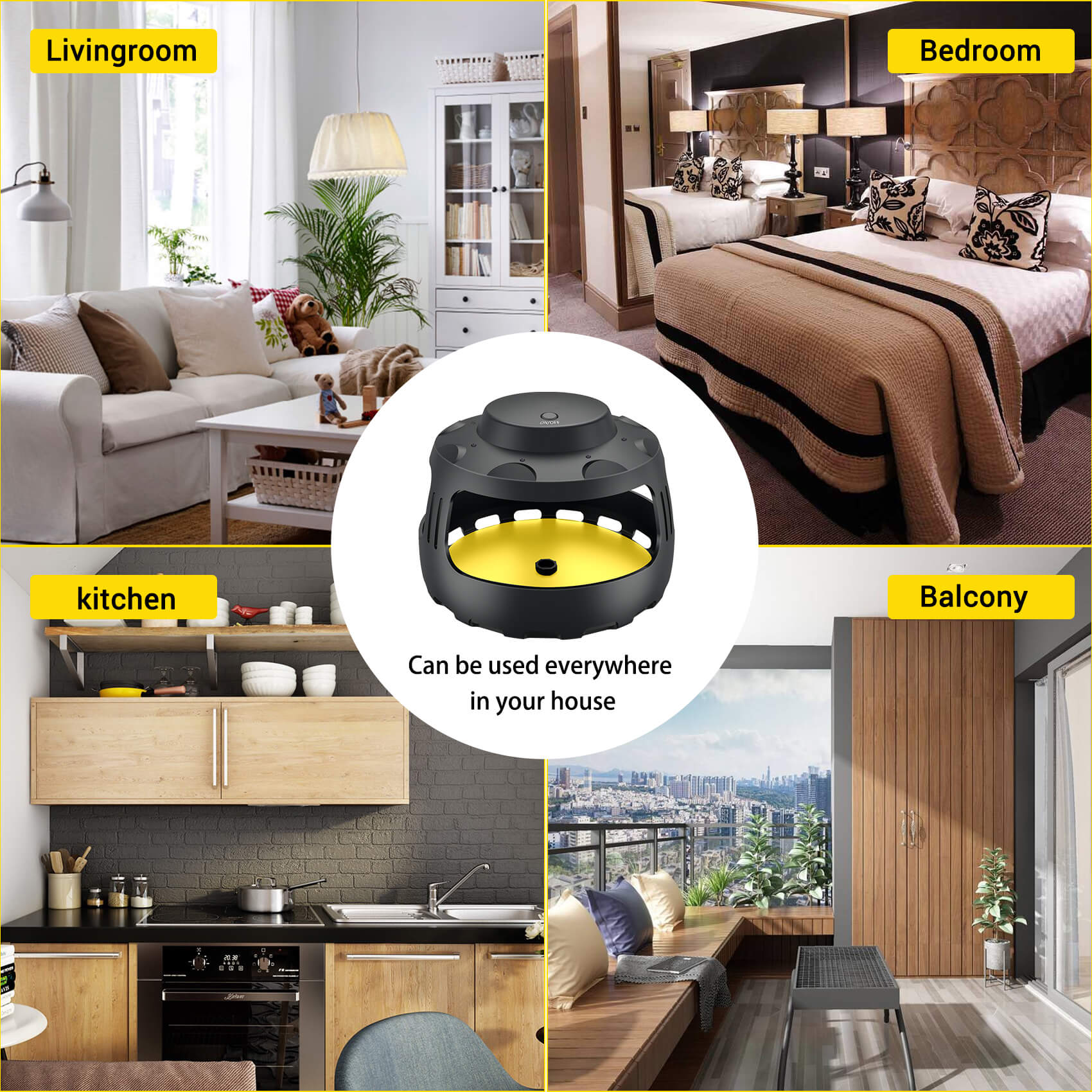 Using a good flea trap is a great step in solving your flea problem.

It’s a great idea to lay down many flea traps but also embark on a complete cleaning process of your home which includes washing bedding, cleaning pets, and vacuuming all affected areas.

Once you’ve done that, you should find that your flea infestation will go away and you and your pets won’t have to worry about them anymore.