What insects are attracted to bug zappers?

Insects are undoubtedly one of the most abundant creatures on the earth’s ecosystem, with over 5.5 million species and more being discovered and classified.

They form a crucial part of the earth’s fauna with beneficial insects such as honey bees, moths, butterflies, and beneficial beetles serving as pollinators, biodegrading, soil aeration, and so on.

As beneficial as some species are, insect pests serve as a menace and are a source for major concern in fields like agricultural sciences, healthcare, and construction. Mosquitoes, bugs, and other insects are vectors of specific disease-causing pathogens that severely affect human health.

Of all the biting flies that inflict harm, mosquitoes are the most prevalent globally.

A 2019 World Health Organization report states that nearly 50% of the world’s population was at risk of malaria caused by the bite of female Anopheles mosquitoes. Common symptoms of malaria include headache, fever, and cold and could lead to death if not treated properly and timely.

Furthermore, diseases spread by bugs, such as Zika virus, West Nile virus, yellow fever, EEE virus, lymphatic filariasis, dengue, and chikungunya, have been on an alarming rise in the past two decades.

That has led to increased awareness of insect-borne diseases, the design of various control methods, and a healthy surge in the demands for insect killer products.

A popular control product is insect repellant such as DEET, Picaridin, IR3535, and oil of lemon eucalyptus. They can be applied to human skin, and some can be used on clothing and often come as sprays, wipes, or lotions.

Other bug control options like spatial repellent, citronella candles, and mosquito nets also help kill bugs like mosquitoes and other biting insects to a certain degree.

However, long-term exposure to these bug and mosquito repellents may cause allergies, irritation in the eyes, and persistent wheeze and asthma in children.

In addition, simple preventive measures such as clearing breeding grounds like standing water from the environment can help lower the presence of mosquitoes and other insects.

Over time, technology has paved the way for more efficient ways of insect control, one of which is the bug zapper.

What is a Bug Zapper?

Rather than giving an open invitation to mosquitoes to have a field day on your blood, attracting them with the carbon dioxide you exhale, your body odor, and temperature, zappers are good opportunities to set a bait for them using something else they cannot resist- ultraviolet light.

The journey to today’s model of zappers started as far as Leonardo Da Vinci’s days to the 20th century when Thomas Edison began to harness the power of electricity. Mosquitoes and other biting insects were just as much a problem to men as then as they are today.

The earliest model created by two never-named Denver entrepreneurs was published in the October 1911 issue of Popular Mechanics as an advertisement for an electric fly trap.

However, due to the exorbitant price, it failed to reach the hands of those who needed it and soon became a failed project.

The US Patent and Trademark Office credited the first patent for a bug zapper to William F. Folmer and Harrison L Chapin in 1931 as Patent No. 1,962,439…

Though the patent was filed in 1931, it wasn’t until 1934 before William Brodbeck Herms, an associate professor of parasitology at the University of California, introduced the electronic insect killer that now serves as a model for all the bug zappers we have today.

How do Bug Zappers work?

As the name suggests, bug zappers kill insects to give a “Zap” sound. They operate on the principle that most flying insects are attracted to high-intensity UV light.

The light bulb attracts bugs to the electrical metal grids, where they are electrocuted by touching two wires with a high voltage between them. The voltage generated between the electrified grid is often around 2 kilovolts or more. Also, the impedance of the power supply and the arrangement of the grid is such that it can heat flies and other bugs but cannot drive a dangerous current through the body of a human.

Many bug zappers are fitted with trays that collect the electrocuted insects; other models are designed to allow the debris to fall to the ground below. Some use a fan to help to trap the insect.

Lights with higher UV radiation levels attract the most bugs.

Battery-powered bug zappers are manufactured, often in the shape of a tennis racket which you can use to hit flying insects. Portable and rechargeable bug zappers use a lithium-ion battery.

The latest news and articles criticize the invention for the indiscriminate killing of wrong bugs but to improve the effectiveness of these devices to kill the biting insects like mosquitoes, attractants other than light like pheromones are also added to the latest models of zappers.

However, this has been tagged the “latest marketing gimmick” by associate professor of entomology with the University of Florida’s Institute of Food and Agricultural Sciences, Jonathan Day.

What bugs are attracted to UV lights?

Because of the irresistible lure of their light, bug zappers are incredibly effective at killing bugs.

Bug zappers will tackle pesky bugs that are not useful, like mosquitoes, flies, fruit flies, or gnats.

Are flies attracted to bug zappers?

Flies and bugs are attracted to UV light from very bright light sources.

Asides from this fly like mosquitoes and other insect pests are generally positively phototaxis that is they are generally attracted to ultraviolet light.

Where is the best place to put a bug zapper?

In addition, hanging zappers are a convenient option for patios and seating areas, while indoor zappers are easier to install as wall fixtures.

Whether indoor or outdoor, it is generally best to keep them high and out of food areas, the reach of pets, children, and family recreational area or living space. It is best to place your bug zapper at least 20-40 feet from people and 6 feet above the ground.

Also, make provision for connection to electricity or any power source.

There is no doubt that flying insects can be very annoying—from flies and moths to those miserable mosquitoes —hovering over your food and around your light bulbs, buzzing in your face, biting and transmitting disease.

Don’t be bothered if you have tried deterrent sprays, citronella torches, and other control measures and still have no luck killing insects.

Indeed, there are effective zappers in various categories but choosing the best bug zapper goes beyond functionality to budget consideration, power type, the purpose of use, and the peculiarity of your environment.

Take your time to read the instructions, specifications, and reviews thoroughly before making your choice.

A good recommendation is the 3- in-1 bug zapper Thanos, which serves as an eliminator for mosquitoes and other flies and as a pest-repeller, controlling mice, rats, and other rodents.

It has a stronger 360-degree UV-light and effective carbon dioxide mosquito attractant. It’s safe, non-toxic, portable, and suitable for indoor and outdoor uses. 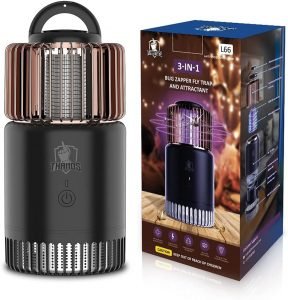 Where to Buy the best Bug Zappers?

You can purchase your best bug zapper online from e-commerce stores like Amazon and Walmart. Also, some production companies sell directly from their company website, such as thanoshome.com

The real question is, what do users of bug zappers have to say?

Contrary to numerous objections and opposing opinions on their effectiveness, there has been an increased demand for bug zappers.

General reviews on popular e-commerce websites like Amazon have largely been positive compared to negative feedback.

Here are some verified reviews from users of the Thanos 3-in-1 Bug zapper:

“Mosquitoes LOVE me. Like if I am sitting around the campfire with 20 friends, I will draw all of them to me and walk away with 30 bites while no one else has a single itch. This works!!!!! I have spent the last few nights outside for hours each evening and have not had a single mosquito bite while just a few days before using this I came in with several. I like that it is also unobtrusive, does not smell, or make any loud noises. I can go about and enjoy my evening as if this miracle zapper is not even there.” – Cassandra, USA.

“Very good. I bought this because I have a baby at home. It can really lure mosquitoes or other flying insects, kill them, and then dry their bodies. You can also choose to turn on or off the electric shock mode to reduce the danger to children. Because the body is dry and has attached paper pads, it is very easy to clean.” – Jay, USA.