Can a bug zapper hurt human?

As crucial as insects are in nature, they can become a nuisance for humans. When night arrives, and the lights go on, you hear the music of the insects.

However, you also pick up the sound of tiny sparks and the electric crackle from bug zappers.

With the purple light, it attracts the bugs and kills them. You can find the electric bug killer in different forms. These gadgets are the new craze in getting rid of those annoying insects.

On the other hand, are bug zappers safe?

We are here to answer all your questions when it comes to the safety of using bug zappers.

What is The Bug Zapper?

To answer whether bug zappers are safe, you need to understand how it works.

There is one wire mesh where you find the electrification taking place and resulting from the wire grids at high voltage. Over the years, the innovation changed, resulting in smaller, more compact forms to use indoors and outside.

Most electric bug killers have a plastic protective covering around the grounded metal to prevent exposure to the high voltage grid. Around the ultraviolet light source is a pair of wire grids powered with an electric circuit.

Thus, it generates up to 2000 volts made for zapping insects. Yet, it lacks a power supply, and design provides more than enough safety for humans. For example, you find some models with fans and trays to collect the bugs. At the same time, others make them fall after electrification.

Most of these devices work with rechargeable batteries not powered with electricity, which is a plus. Nevertheless, you can find some models still using electrical current. Now to answer your questions about safety for humans using bug zappers make sure to keep reading.

The Thanos® mosquito trap is a 4-in-1 device with contemporary styling and outstanding next-generation efficacy.

Lethal for mosquitoes, gnats, wasps, moths, and other pests, the device uses UVA light technology in conjunction with electric mesh, a baiting station, and a powerful silent fan system to attract, capture, and kill flying insects in the home or office environment.

Are Bug Zappers Harmful to Humans?

Bug zappers can certainly pack a punch. When the device zaps insects, it happens with a high voltage, and using only voltage does not kill. Before death can occur, you need to be electrocuted with the current present. The voltage in bug zappers ranges between 2000 to 4000 volts. It can shock if you touch the mesh wire.

The shock is painful depending on the volts present, but it ends without further severe pain. There is no death, but if you keep getting a continuous shock, it can lead to paralysis but not death. The only time it can kill you is if the current is present.

Therefore, the good news is that bug zappers do not provide continuous electrification. Once an insect is caught in the zapper, it electrocutes. It will take place briefly until another one comes around. It is the same as when you touch the inner wires, you will feel a momentary shock, and that is it.

Are Bug Zappers Safe to Touch?

If you really want to touch the mesh wires and the electric grid, then yes, it will hurt as you get a zap and it burns the longer you hold your finger there. Thus, bug zappers are safe to touch where you are supposed to and not push your fingers where they do not belong.

Hence, if you plan to use it indoors or outside, the important thing is to hang it up high so no one can feel the urge to touch the electric fly control units.

What Would Happen If I Touched a Bug Zapper?

One thing is for sure it will hurt with the momentary shock. You can end up burning your hand as the voltage causes the flying insects killed to explode. So do not go touching the mesh wires. Bug zapper hurt can happen but you won’t be seriously injured.

The light source attracts insects but don’t let that ultraviolet light draw you in! You may think about trying it as a joke but don’t. The electric bug zappers uses are wide-ranging but they aren’t to be used for fun.

Can You Leave Your Bug Zapper on All The Time?

The bug zapper works more effectively when left on 24/7. Doing this helps break the bugs’ lifecycle for insect control. The only time you would not want to keep it on is when making food, and neither do you want to have it close to your kitchen.

On the other hand, you can keep it on when sleeping for insects killed to meet their doom. The only concern when leaving it on is the UV light exposure. While outdoors, you will not have any fears, but you can get radiation exposure over time when placed close to you.

How to Use a Bug Zapper Effectively

As with an electric fly swatter, bug zappers give you satisfaction in removing unwanted insects in and around the home. Still, the important thing is to use them the correct way. For example, if you have an electrical model, never expose it to water.

Also, keep them up high and out of reach for children. Finally, when moving the bug zapper, you always have to disconnect the power first, depending on the type. Never place an electric bug killer where you cook and put them in the hallway or an entrance.

Lastly, keep them away from sitting areas outside and not place them on the porch. Instead, place the bug zapper in your yard to attract all the insects away from the conversation. What’s more, the fact is that the device can kill mosquitoes, but you still need to take other precautions as well.

Thanos Bug zapper has been approved by the EPA (Environmental Protection Agency) of the United States and is completely safe for indoor home use. 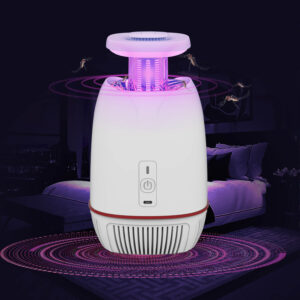 Alberto Broce said the zappers that attract insects can create particles that can be breathed in. Harmful particles Broce said can cause allergies and other issues which is why you should ideally place them away from sitting areas.

For effective insect control, a bug zapper helps. Unfortunately, the light will attract insects, and the electrocution causes their death. You can use it to kill most insects, from flies to mosquitoes.

On the other hand, try not to keep it too close to sleeping areas as it can lead to constant exposure. When preparing food make sure that it is not in close proximity, as it will contaminate your food.

We hope the article answers all your questions about using the bug zapper.

Save your money now!