Where is the best place to put a bug zapper?

Do you enjoy spending cool evenings chilling in your outdoor garden or patio listening to your favorite music or reading?

Time spent like this could be disturbed by insect flies, especially those attracted to light. Using an insecticide or chemical to repel flies can be futile in such spaces, hence needing a device like a bug zapper.

What is a bug zapper?

It is a device that kills flying insects or bugs.

It does this using an electric current. It was referred to as an electric insect killer or an electric bug device. It comprises a light source from fluorescent bulbs that attract flies. It also has wires that transmit the high voltage and electrocute them when they come in contact.

The bug zapper grids also make it impossible to kill large insects. It has a fitted tray used to collect dead insects at its base. An external bait can also be attached to it to attract these insect flies.

The word zapper in the name comes from its sound after trapping bugs. This electric crackle sounds like a “zap,” thereby the name zapper.

How does a bug zapper work ?

Once it is connected to a power source, electricity runs through it and produces ultraviolet light, and the bug zapper turn on. Then this light attracts flies.

Once the bugs contact the electric grid, they get trapped between the wires. The electric current passing through these wires electrocutes them and gets them killed.

Do Bug Zappers use a lot of electricity?

This depends on the the type and how long it is left to operate. A large electric bug zapper on all night would use more electricity than a smaller one used for a few hours in the evening.

Are there other forms of Bug Zappers?

Aside from the common electric one used, some also work with batteries.

This requires being charged from time to time, and they are said to last some 6 hours after a full charge.

But the most common is the electronic bug zapper which requires electricity to produce ultraviolet light. Some newly developed ones also emit carbon dioxide or gases that attract insects and the usual UV light they are attracted to.

Since any ultraviolet ray is dangerous, one must also be careful while using it as ultraviolet light draw other insects.

Hence, it would be best if you stayed at least 25cm away from the bulbs of the bug zapper. It does not pose any major hazard to the home.

Where is the best place to put a bug zapper ?

A bug zapper can be used indoors and outdoors, but it is best situated outdoors. This is because it is easier to control bugs getting into the house than outside.

Outdoors should be placed far from where people would likely be 15-20 feet away. Also, its position unit is at least 5-7 feet from ground level to make it as effective as it should be. It works best as an outdoor electrical appliance. 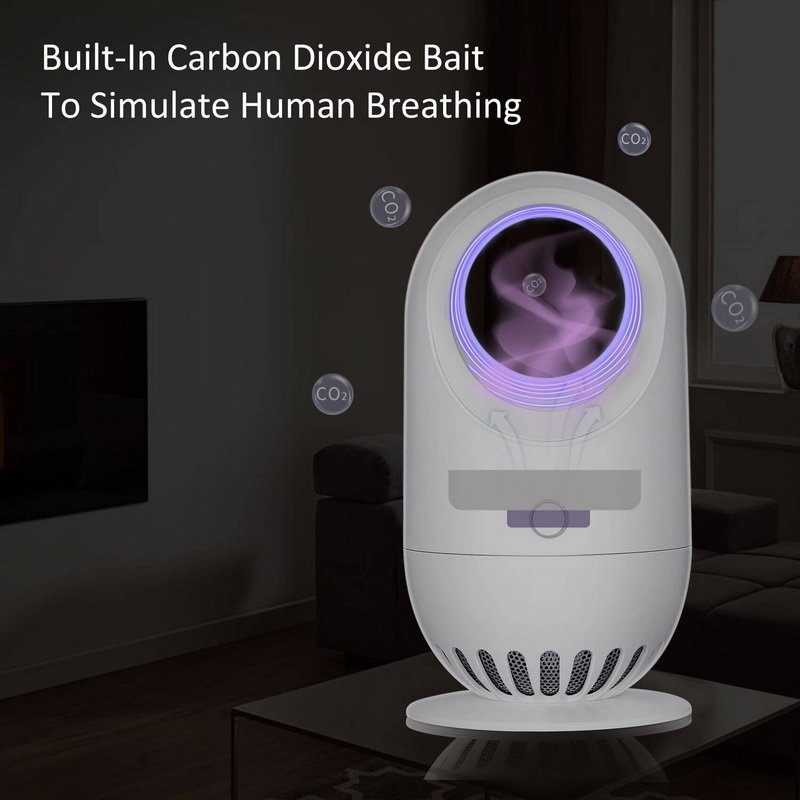 How to position a bug zapper outdoors.

Hanging your bug zapper on outdoor walls or the zapper on a tree in the form of bird feeders or flower baskets makes it fairly inconspicuous.

Also, it should be protected from direct rain. It can also be placed on a tree using a tree or shepherd hook. These items can be purchased from hardware home improvement stores.

This device works with electricity; hence proximity to an electric power source is another factor that should be considered.

Although outdoor power sockets are rarely found, it could be challenging to get a power outlet to connect them. The use of an extension cord comes into play. It is also advised that these electrical cords blends with either the ground or grass it falls on to prevent trips or falls.

Can you hang a bug zapper from your house?

Just at the entrance to the house, above the door, a bug zapper can be positioned there or better still up the wall as a lamp. However, care must be taken for the appropriate level hanging your bug zapper.

How far should a bug zapper be from your house?

To avoid contamination by these bugs after they get electrocuted due to the harmful particles they release, it is important to place bug zappers some feet away from the house where people are.

Can I use a bug zapper in my home?

A bug zapper can be used indoors as well. It is best positioned by hanging your bug zapper right at the entrance, right above the door.

However, great care must be taken in situating it due to pets or children in the house.

Also, it should be as far as possible from water or a gas source within the house. Although a bug zapper ratchet might be preferred to be used as its tennis ratchet design makes it easy to sweep across.

Can you put a bug zapper on the table?

It aims to attract insects, so placing them closer to ground level will not make this possible. Also, a table is within reach of anybody around, so placing it on one might be hazardous.

Does a bug zapper have to be hung?

The zapper needs to be feet away from areas with people, and it is possible only when it is well above the ground. A large electric bug zapper is best hung in its position unit using double-sided hooks or a shepherd hook to prevent falling off.

Where is the best place to put an electric bug zapper in the kitchen?

They should be placed right at the doors to the kitchen to prevent the entry of bugs into the kitchen area using a double-sided hook.

It should be noted that to prevent contamination, a bug zapper should not be situated above or close to food preparation areas. Also, some emit such as carbon dioxide if close to cooking parts of the kitchen due to the gases.

What kind of bugs do bug zappers kill?

Undoubtedly, bug zappers work by killing insects, but they kill more non-biting bugs than they attract biting insects. These non-biting ones include beneficial insects such as beetles, moths, ants, and some parasitic wasps.

This is one big disadvantage of bug zappers as they attack, for instance, pollinators that do not bother people. Due to this, you might want to be sure of the kind of insects you want to fight off before getting a bug zapper.

Does bug zapping work on mosquitoes?

Ultraviolet lights draw most insects. However, mosquitoes are not one of these.

They need to get attracted to bug zappers using a repellant before getting electrocuted and killed.

How do I attract mosquitoes to my bug zapper?

Mosquitoes are biting insects that cause harm to human health. Mosquitoes are not attracted to UV lights. This is why a chemical like octenol is added to the bug zapper to attract mosquitoes.

This chemical is said to smell just like human sweat, which would attract the mosquitoes and entrap them. This can be used indoors to enjoy a mosquito-free environment.

Do they attract more bugs?

Due to the light they produce, they attract bugs way more than they can trap and kill. This can become a disaster if care is not taken, as they could invite way more insects than already present.

Hence, emphasizing the need to keep them feet away from humans and food areas.

While they control the population of bugs, it is unknown if they can kill them at any other stage of their development during the insect breeding cycle alternatively. Although, it could help destroy their breeding sites to prevent further infestation.

Can you leave one on all the time?

Outdoor bug zappers should be left switched on at all times.

But the best way to alter insects’ breeding cycle to control the population attracted is by leaving it at all times, i.e., bug zapper from dusk to dawn should be left on.

Care must be taken, though, as it is one of the other electrical devices in the home and should not be on for too long a time. This fire hazard is harmful to human health.

Battery-powered bug zappers should not be on for too long after being charged not to get damaged.

Will bug zappers cause a fire in your home?

A power surge or break in the electric circuit could lead to a fire hazard due to high voltages generated. This means it could catch fire; hence, It is important to regularly check to do the necessary to maintain and keep them in good shape.

Do bug zappers work in daylight?

Due to sunlight’s interference, which is way brighter than the ultraviolet light from the bug zapper, it might not be effective during the day, especially outdoors.

Hence, it seems more reasonable to put it on only at night or indoors in areas with controlled lighting.

Is a bug zapper harmful to pets?

It is usually in a protective cage with plastic or metal bars not to electrocute the wrong targets like beneficial insects, bigger animals, or even human beings. This makes them unable to harm pets like dogs or cats living within the homes. It is still advised to keep them feet away from areas where pets are.

Are bug zappers harmful to humans?

They cause little or no harm to humans if hung properly and distanced from areas where humans are.

Bug zappers are best used outdoors, and the position unit at least 5 feet above the ground.