Bug zappers are great at attracting and killing pests and harmful insects that might invade your house. They allow you to live in peace and enjoy the outdoors.

Bugs are generally considered pests in an urban environment.

One of the most annoying, aggressive, and feared pest types is wasps, especially the yellow jacket (also called meat bees) breed which is common in North America.

As bug zappers are advertised to be pest killers and wasps are pests, it stands to reason that bug zappers should work on the wasps right?

What are yellow jackets?

Wasps are one of the most aggressive flying bug species on the planet.

As a general rule, no living creature attacks or shows aggression to another species unless it feels threatened. Unfortunately, wasps are often the exception.

One of the most common subspecies of wasps known to the North American populace is the yellow jacket. These are small, stinger bearing, flying insects with a black and yellow body, hence the name yellow jacket. 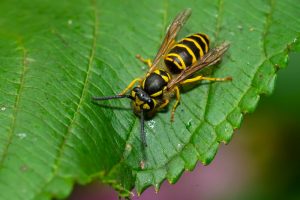 There are a few things they can be consumed with like paper wasps. 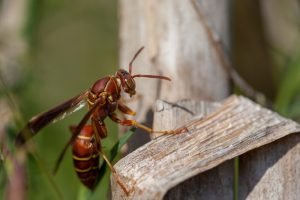 (This is paper wasp)

The bald-faced hornets are usually not considered yellow jackets due to their different coloring. However, they are a subspecies of yellow jackets.

A yellow jacket worker wasp, on average, is around 0.47inches.

In contrast, a yellow jacket queen can be up to 0.75inches long.

Yellow jackets never nest twice in the same place and change their nests every season. The lifespan of a typical yellow jacket worker is between 12-22 days.

Moreover, a yellow jacket queen lives up to a year to find new nest sites and is the last yellow jacket to leave, to continue giving birth to the new brood.

Do yellow jackets get attracted to Bug zappers?

Yellow jackets, like all other wasps, are not attracted to light sources.

Their visual capabilities are weak, and thereby they see in low resolution. Therefore they do not respond actively to UV stimuli. Although their foraging activities are affected by light intensity, light in itself is not an attraction attribute for them.

Moreover, wasps are attracted to dark colors such as red, black, and dark brown.

For a wasp, the color red appears as black. Wasps consider dark objects as threats and light-colored objects to be nonthreatening.

Therefore, the UV lure is ineffective for wasps and bees. However, parasitic wasps are a type of smaller wasps that do get attracted by UV light. Still, they are too small and pose no threat to humans in any form.

How to get rid of yellow jackets if I can’t find the nest?

However, sometimes you might not be able to find the wasp nest.

Yellow jackets are known to make their nests underground in lawns and playgrounds. They also make nests above ground on trees and in crevices in houses. A yellow jacket nest can grow up to as big as a car. Therefore, it is better to remove such nests as soon as possible.

If you cannot find their nest, traps and other insecticides can only kill a handful of these invaders.

There exists no method to get rid of wasps without disposing of the nest first. A wasp will fly up to 1000 yards to forage. Therefore, regardless of how many you kill, more will come in their place as long as the yellow jacket nest stands.

If you find a yellow jacket buzzing around in your garage or yard, chances are there is a nest nearby.

Threatening or killing a yellow jacket close to its nest triggers the defense response of the nest. Yellow jackets love to swarm, and if they see you as a threat, you can expect a swarm to be coming your way.

The best way to get rid of pests like wasps is to find the nest and have it removed.

Wasps, like other creatures, will not attack you unless they perceive you as a threat. However, a yellow jacket will at times sting you for just being too close to it. Being still can help but does not guarantee safety.

If there are already wasps nesting in your yard or garage, it is best to call an exterminator to deal with the nest. Nonetheless, there are methods you can employ yourself to exterminate the nest.

If the wasps have made an underground nest, the first step is to find all the entrance hole to the yellow jacket nest.

Most yellow jacket underground nests only have a single opening. However, a subterranean nest can have multiple holes. For safety, wear a bee suit before approaching the nest.

To begin the removal process, approaching the nest during the night is better as the wasps around the nest are less likely to spot you. Cover all the extra exits if there are any.

Afterward, spray the hole with insecticides and immediately seal the opening with something to avoid a swarm attack. The wasps inside will suffocate and die from the insecticide poison. You can dig them up and dispose of them after that.

A less common method is to use a high-powered vacuum to suck all the wasps in from the hole. The wasps will swarm from the opening but get sucked into the vacuum pump. Wait until no more wasps are emerging from the crevice before you start digging.

An extreme but highly effective method is to pour liquid nitrogen into the nest from the entrance.

Liquid nitrogen will instantly freeze the entire nest and kill everything in there. You can dig up and dispose of the nest safely after that. This method is expensive compared to others, but it works instantaneously and feels awesome.

Most yellow jacket species are subterranean, but it is not a necessity.

Certain other yellow jackets like the German yellow jacket and bald-faced hornets might nest on trees and even in crevices. Exterminating these yellow jacket nests is more difficult compared to subterranean nests. Therefore it is recommended to hire professionals for their removal.

Outdoor yellow jacket nests only have one hole for entry and exit. So, an easy method is to focus vacuum the hole until no more attackers come out.

After the attackers are dealt with, you can remove the nest. Keep in mind vacuum will not necessarily suck in all the attackers. As such, be cautious when tearing the nest off.

Insect repellants work on insects like mosquitos and flies but are largely ineffective against wasps or other stinging insects like bees.

For an insect repellant to work, the insect must be attracted to us in the first place. Social wasps like the yellow jackets are not attracted to humans. They are attracted to fruit juice, foods, and scents of meat, especially rotting meat.

While yellow jackets are aggressive, they will never approach a human for no reason.

However, if they feel threatened, the wasps will mark the threat with a pheromone that signals other wasps to swarm and attack. For these reasons, an insect repellant can help you keep away a non-agitated wasp, but an angry yellow jacket will still sting you regardless.

Some insecticide-based repellants kill the insect upon contact with the clothes. However, this does not deter the wasp from stinging you first.

Are there any natural ways to get rid of yellow jackets?

Like all insects, yellow jackets also have their natural predators.

Unfortunately, a yellow jacket’s natural predator may not be a viable option for you as they include bears, skunks, moles, shrews, badgers, and raccoons. Many of these creatures cannot be domesticated, thereby are not a practical long-term solution.

There are, however, species of plants that wasps abhor.

Wasps hate peppermint, spear mints as well as any other mint-based herbs. Planting mint herbs around your house can deter wasps from approaching your household premises. Other plants hated by the wasps include thyme and lemongrass.

What to do if you get stung by a yellow jacket

If you are stung by yellow jacket, immediately check for signs of rashes or allergies.

Wasp and specifically yellow jacket stings are generally harmless to humans. On average, a human can bear 10 wasp stings per pound of weight. However, nearly 60 people die every year in the US due to wasp stings.

These fatalities are due to allergic reactions to the wasp’s alkaline venom.

Contact the emergency helpline immediately if you notice any signs of allergies such as nausea, headache, or rash. In case there are no severe allergic reactions, the swelling and pain will subside by themselves over time.

You can also treat it by washing the area stung and applying cold packs. Wasp stings subside within 3-4 days for most people. Whereas, for sensitive people, it can last up to a week. Applying antihistamines can help alleviate the swelling and pain from a wasp sting.