What are Humane Mouse Traps?

What’s the first thing you do when you see a mouse in your home? Do you run away from it? Do you try to find out where it’s going? Or maybe you are the kind of person that gets angry and turns your home into a no mouse zone.

Whatever your reaction, we know no one is happy to discover that they now share a home with mice.

Mice can destroy your property and nibble their way through your food, cable, and boxes. Plus, it is not even healthy for you to have mice in your home. They can carry diseases like antivirus and salmonella, poop all over your home and cause you to be uncomfortable.

So how do you get rid of mice in the most humane way possible?

Mice, are of course pests that you need to eliminate, but you need to do this humanely without causing them torture or pain.

Well, the good thing is, you can use humane mouse traps to get them out of your home for good without brutalizing them.

What is a humane trap?

A humane trap is a trap that causes little or no pain to the captured animal. Do not get us wrong, they are still traps because they seek to capture and isolate the animal.

But unlike a snap trap or glue board, a humane trap does not inflict pain on the animal, even though it has been caught.

Humane traps are not only used for mice but can also be used for animals such as rats, shrews and moles. There are two major categories of humane traps:

However, for the purpose of this article, we are going to be focusing on humane mouse traps.

Humane mouse traps can be classified into these two categories too, as mouse traps like the electric kind belong to the first category where the mouse is killed instantly and does not undergo torture.

While live traps, also known as catch and release traps, keep the mouse or mice in a breathable enclosure where it can no longer disturb you or your household.

The next question is: do these humane mouse traps actually work?

How does a humane mouse trap work?

Like we said earlier, it’s very hard for humane mouse traps to kill captured mice, except in some unique circumstances. Let’s say you have 3 mice ravaging your home. You buy a mouse catch trap and set it on the path you notice they usually run across.

You put bait like peanut butter or high calorie candy that is sure to attract them.

After a while, a curious mouse dashes into your mouse trap as it seeks to reach for the peanut butter.

But alas! It can no longer get out of the trap. So it’s stuck there, not knowing what to do. This is exactly how humane live traps work. Sometimes, the trap might even catch two mice at once.

Now, the mouse will remain there until you release it. 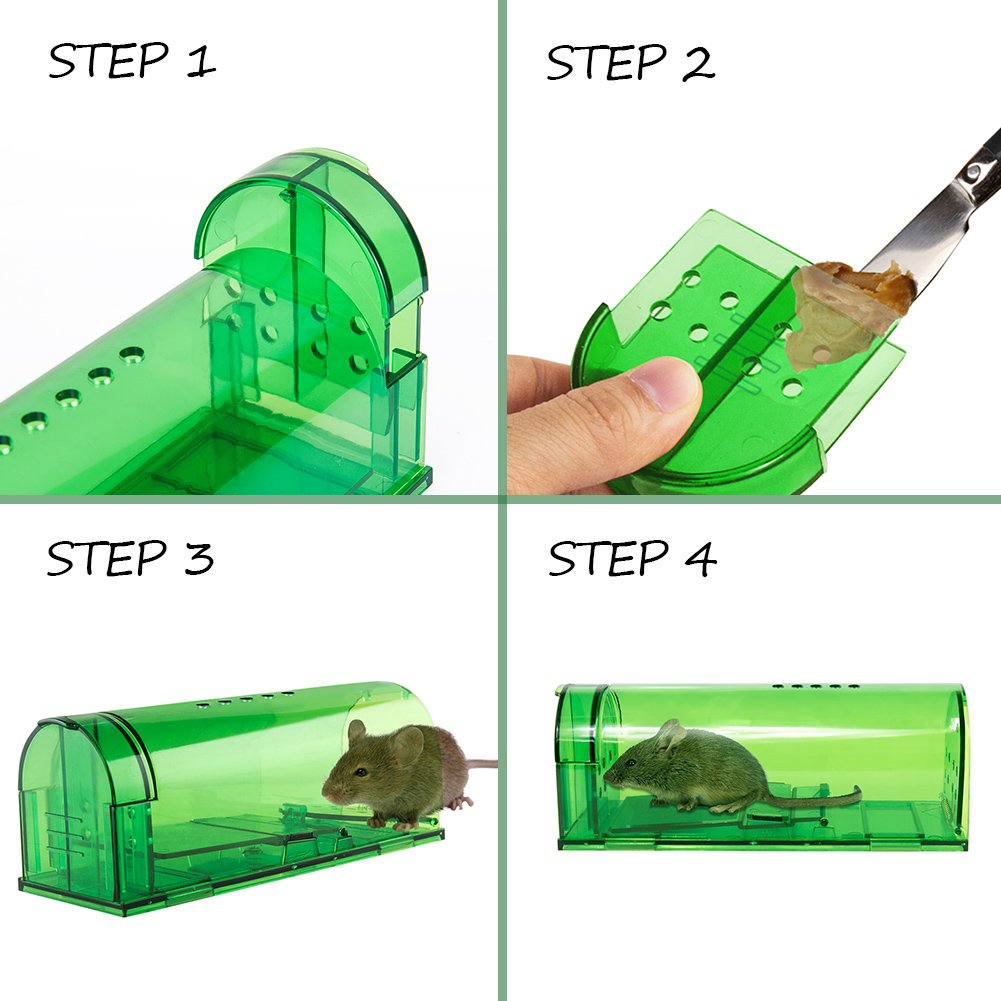 Don’t worry, it would not suffocate even after some hours, especially when you buy a well-aerated trap like ours. But, you have to be careful not to get too comfortable leaving the mouse there as it can die due to starvation.

Be sure to check your traps at least twice a day so you don’t end up with a dead pest the following day. This is the only trap that keeps the mouse alive during it’s period of captivity.

Do not think because the mouse does not die instantly that the traps are useless, no. Humane traps are effective against all kinds of rodent pests apart from mice too.

However, their effectiveness largely depends on you.

What do we mean?

If you do not do your part, then a humane mouse trap can turn inhumane, and very fast too. As far as the mouse is in a trap you set, you are responsible for what happens to it. If it dies in the trap, it’s on you.

This is why you have to take time to monitor your mouse trap and dispose of any mouse immediately.

Where can you release trapped mice into?

Well, for your humane trap to work, you have to catch and release a mouse without it dying or being injured in your hands. You should release trapped mice far away from your home, maybe out of at least a 100-mile radius.

The thing is, if you release these mice too close to your home or neighbourhood, they might find their way back as they love to dwell in places they are comfortable in. You can also release caught mice into the woods or areas that are relatively abandoned.

Just do not release them into a residential area or an area where stay like an office because they can go there, make a new home and start multiplying aggressively. You wouldn’t want someone to release a few mice next to your home, right?

Which mouse traps are most humane?

Although there are two broad categories of mice traps: the live catch traps and the electric traps, there are traps that are more humane than others.

Sure the electric traps are humane, but the mice still go through some amount of pain before they die. Even with live catch traps, some models are still safer than others.

For example, if you had to choose between a steel cage live trap and a plastic catch trap, which one would you think is more humane?

If you would chose the plastic one, then you are right. Plastic catch traps are safer than steel one for one obvious reason.

With metal traps, mice can easily hurt themselves while they are trying to escape the trap or look for a way out.

Also, if one of the steel wires fall out of place, it can easily injure the mouse. The mouse can also get stuck in-between the steel wires and get badly injured while trying to get out.

Humane mouse traps are preferable to inhumane mouse traps because they get the job done easily and with much less stress. Also, your conscience would not haunt you because you did the right thing by not just causing so much pain to the mouse.

In fact, humane animal traps are more hygienic because they minimize your contact with the mouse.

Imagine handling a wounded mouse or trying to dispose of an already decaying mouse. Gross, isn’t it? You should not have to go through all that stress. Get a humane mouse trap today and keep your home rodent free with ease!