What are Humane Mouse Traps?

A regular spring-loaded mousetrap (called snap traps) are a cruel way of getting rid of a mouse infestation.

These mousetraps are hard to properly place and even then do not guarantee a swift and painless end for the dead mouse.

You hate the problems that a pest brings, but you do not necessarily hate the pest itself. The physical harm to the mouse is entirely unnecessary to reach the outcome you want and therefore traditional snap traps are not needed.

It gets worse as many mousetraps are unable to catch a mouse.

Instead, the mouse is injured and escapes from these kill traps. These mice later succumb to their injuries and infections before eventually dying.

To avoid inflicting the mice with such a cruel fate, it is better to use humane traps. 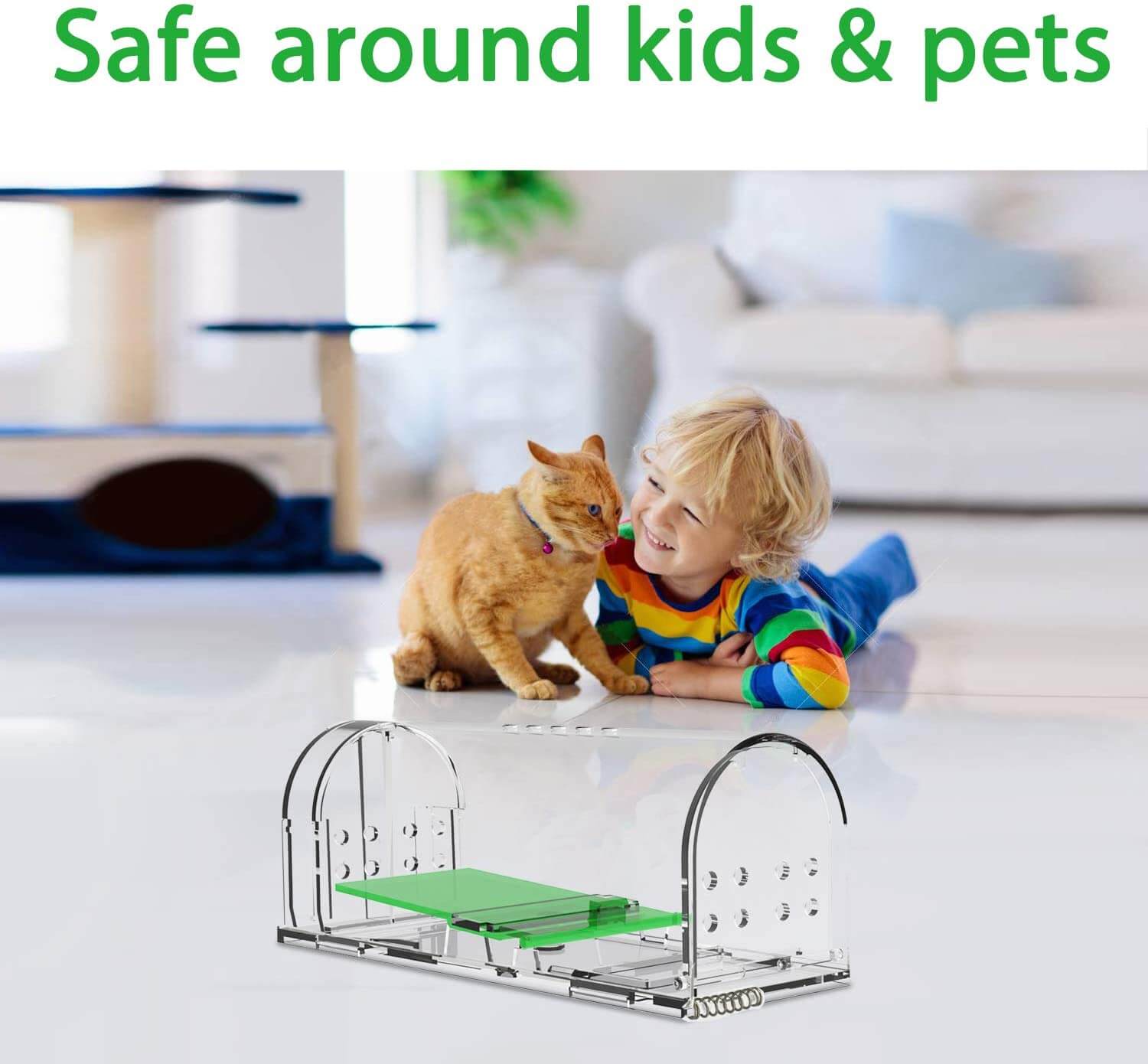 When someone talks about a humane mouse trap, they mostly mean catch and release kinds of mousetraps.

Humane mouse traps work as they are designed to trap the mice inside them with a trap door, without causing them any physical harm.

There are also electrical mousetraps that are considered humane by many people.

This is because an electrical mousetrap immediately ends the mouse’s life without letting it suffer. The death is near-instant so this is the best humane mouse trap for those who want to exterminate mice but without them having a slow death.

The use of electrical mousetraps is better in areas where it is a bad idea to release the mice after catching them.

Mice are a part of the ecosystem but they also multiply in numbers rapidly. Electronic traps are best used for population control purposes.

How Well Do Humane Mousetraps Work?

It is hard to define what it means for a mouse trap to ‘work’.

Lethal mousetraps such as spring loaded bar mousetraps do ultimately manage to kill the mice but they do not have a high catch rate.

Humane mouse traps, on the other hand, have a high catch rate and do not decrease in effectiveness over time, but the mouse you released in the environment can return to your house if you did not release it far enough.

Between the two, humane mouse traps do work better.

However, since the purpose of a humane trap is to avoid making the mouse suffer, it may not be as effective as you think.

Despite the good intentions, many mousetraps are marketed as ‘humane’ but can lead to the mouse’s death. This is because these timid creatures have a very low threshold to bear stress and anxiety.

A mouse caught in such traps can die overnight if it feels too threatened and stressed. even with air holes.

Nevertheless, a good quality humane mouse trap will successfully catch a mouse without making it suffer.

The effectiveness of a trap largely depends on the ability of the trap to attract a mouse towards itself.

Mice love eating seeds and nuts; using a good bait will make the trap work better. Since mice are timid animals, they do not like being out in the open.

To make the traps work better, place them along the walls and near dark corners. Most catch and release mousetraps only have enough space for one mouse.

Therefore, while they are very effective, they may not be the best solution against a huge population of mice. Electric traps tend to work better against higher numbers.

Nevertheless, humane mousetraps do work at catching mice and should be used whenever possible to minimize animal cruelty.

Should I Use Humane Mousetraps?

There are many benefits of using a live catch trap not only for the environment but for you as well. A humane mouse trap works better than other mouse traps for pest control in a barn or household environment.

One of the biggest advantages of a humane mouse trap is that their effectiveness for solving your mouse problem does not decrease over time. This is because mice are easily spooked and learn to avoid anything that they deem too dangerous.

A traditional snap trap or the like scare the mouse more often than catching them.

Furthermore, these traps are easy to escape from and many times a mouse will get away from these traps with injuries and trauma.

However, the best humane mouse traps do not traumatize the mouse and are unlikely to fail. Using a humane mouse trap allows you to get rid of your pest problem without subjecting the mice to suffering and cruelty.

Field mice are only a pest to human households, they are still part of the environment’s ecological system and are necessary to the ecosystem. They are a source of food for many animals in the wild such as bobcats, hawks, owls, coyotes, and other animals.

They are primarily herbivores and generally do not attack humans. Therefore, killing the mouse is not necessarily required, and just removing it from your house is sufficient which is why live traps are great.

The Human Mouse Trap from Thanoshome is a perfect example of how you can get rid of mice and rats without a kill mouse trap. This is the best mouse trap for the job and will solve your issues in just a matter of days. 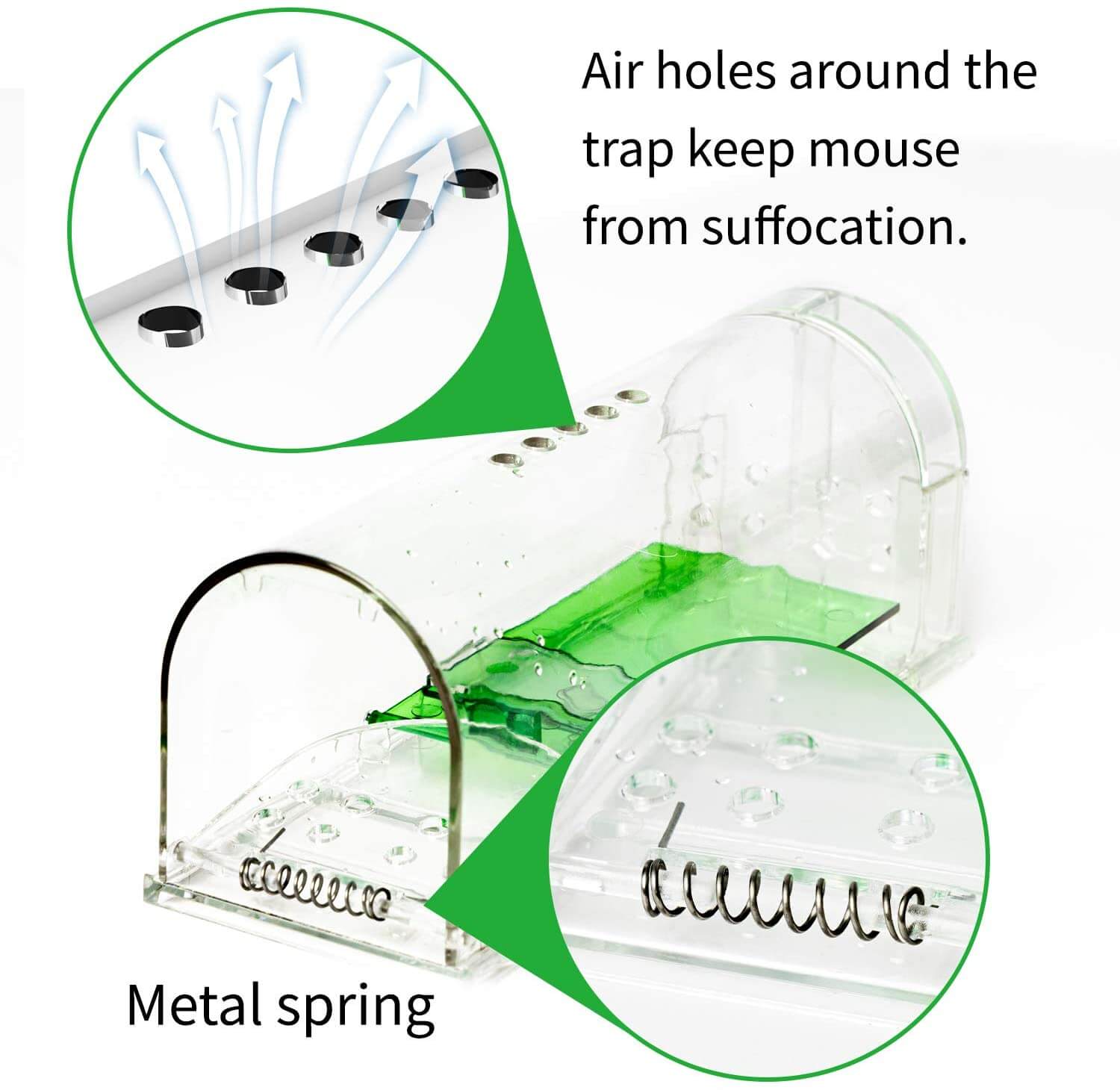 The trap is non lethal and safe as the mouse will be lured by the bait inside and the trigger mechanism will be activated and the mouse trapped. You can then release it without any humans directly touching the entry points.

These are the best humane mouse traps as they also come in a pack of four so you can spread them around the home to catch your rodent and then release it into a wooded area.

How do I prevent mice from coming back?

While the idea of getting rid of mice by traps may seem simple at first, there are many things to keep in mind to prevent mice from coming back. Mice are adaptable living beings, so you need to take into account their adaptable behavior to prevent their return. Mice enter your house through crevices and holes that connect to the outside.

Finding these openings and covering them will prevent new unwanted visitors into your house. Mice also love to climb up through sewerage pipes to enter places with food. As such, you should make sure that none of the drainage pipes are left uncovered.

A common mistake among people is to underestimate the size of the mouse and its ability to slip through an opening. The average size of a house mouse is between 2.4 and 4.3 inches. House mice need only a hole as wide as 1 inch to squeeze through and enter your homes.

Other than securing your house against the furry invaders, you should also avoid leaving any food uncovered in your kitchen. Mice will be attracted to the scents of the food, leading to problems for both you and the mouse.

Additionally, one of the most effective ways of preventing the mice from entering your homes is to have their natural predators in the area. Cats or rat terriers are excellent pets that can scare off any mice that want to return as well as get rid of existing ones.

Most humane mouse traps are designed to ensure a mouse does not escape.

This makes them extremely effective in catching the mice and preventing them from escaping the trap after being caught. Some poorly-made humane mousetraps break or do not properly secure a mouse, so it is better to purchase a good quality mousetrap or make one yourself.

How often should I check a humane mousetrap?

To avoid leaving the mouse unattended without food and water for too long, it is better to check your humane mouse traps twice a day at the minimum.

Hunger and thirst can also cause your mouse to feel stressed. Moreover, for a catch and release type trap, the mouse should be released as soon as possible in the wild to ensure negatively affecting it.

Where should I release the caught mice?

Ideally, you should release the mice within 100 meters of where you catch them.

Being released in an unfamiliar area will result in the mouse’s death from predators or other dangers. The purpose of release should be to prevent the mouse from coming back inside your home while simultaneously ensuring it does not immediately die.