Bugs are a major menace in any household since they have the label of spreading diseases.

Bug zappers are the ultimate weapons to kill these pesky insects. The invention of the first bug zapper dates back to 1934.

However, people often question the effectiveness of these zappers.

Bug zappers work, and they kill a lot of insects, including mosquito.

A bug zapper got its name because of the “zapping sound” when it kills a bug by electrocution. Moreover, this zapping sound is due to a sudden shock that those insects get when they touch it.

What Are the Structural Components of a Bug Zapper?

A bug zapper is an electric insect killer. It is important to know a bug zapper before purchasing it.

The shape of a bug zapper is similar to a lantern. Its outer structure is either of plastic or grounded metal. However, in some cases, it may have a rectangular shape. There is a hanger on the top of a zapper that helps hang it indoor or outdoor as per requirement.

Taking about the  internal structure of a traditional bug zapper, it has two light bulbs. The light bulb in a bug zapper houses a fluorescent tube. It emits ultraviolet light to lure insects in huge quantities. Around the light bulb, we have an electric grid. The distance between these electric grids is a few millimeters equal to the size of insects.

The third and most important part of a bug zapper is the electric circuit. It converts the input supply of 120 volts into 2000 volts. Therefore, it electrocutes flying insects when they complete the circuit by touching the electric grid. 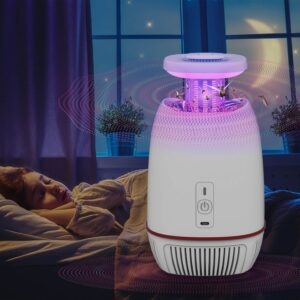 What Are the Advantages of Using Bug Zappers?

Bug zappers have countless advantages as forecasted from their growing demand.

An indoor bug zapper attracts bugs of certain species and every possible type. Furthermore, they kill bugs through the electrocution process and help with insect control.

How Does a Zapper Work?

They trap insects of many species. After attracting them, it uses the principle of electrocution to kill them. Bug zappers use UV light to attract insects and other bugs. It is pertinent to mention that insects are more attracted to ultraviolet light than traditional visible light.

The ultraviolet light attracts the flying bugs and kills them instantly through electrocution. The electric shock is of such high intensity that it vaporizes some body parts of the dead bugs. The body parts of the bugs fall as far as 7 feet.

Yes, the bug zapper is the ultimate killer of all types of flying insects.

For instance, mosquitoes find carbon dioxide emitted from the breath of humans more attractive than ultraviolet light. Hence, the traditional UV emitting zappers may not kill insects like mosquitoes in larger quantities. Other than that, bug zappers kill most of the flying insects.

Note : Thanos bug zapper will emit the carbon dioxide ( CO2) something like human, in order to attract mosquito. 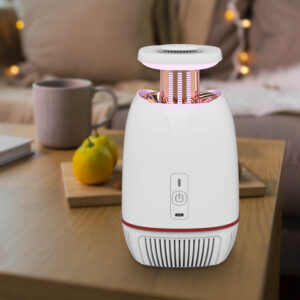 Flying insects find UV light extremely attractive because they can see it visibly clearer than the light of a room bulb. Therefore, they easily give up on this artificial trap.

Can A Bug Zapper Help to Control Mosquitoes?

Mosquitoes are the most hated insect in every house.

These blood-sucking pests have more than 3,500 species in the world. Most species are carriers of mosquito-borne diseases. You can understand the seriousness of mosquito problems because they are responsible for most human deaths.

The mosquito population has crossed 100 trillion as per the latest researches.

It is way more than the population of humans, and these disease-spreading insects severely outnumber us. Mosquitoes are the deadliest among the other species of flying parasites. Therefore, it is of sheer importance to understand mosquito behavior.

Female mosquitoes need blood for their egg-laying process. These egg-laying females crave human blood, and they get attracted easily by the carbon dioxide coming out of the breath of humans.

A traditional UV light bug zapper kills 5% of mosquitoes, among other insects.

However, some modern bug zappers have a mosquito attractant in them.

For example, “Thanos bug zapper” come with the best mosquito attractant in the market.

It is non-toxic and is used in many modern bug zappers, and it is one of the most effective mosquito traps. It will attract mosquitoes in huge numbers and will kill them through electrocution.

How Much Amount of Electricity Do These Zappers Consume?

Most of these traps work directly on electricity.

Therefore, people are curious to know the electricity consumption of these traps.

A zapper has a transformer mechanism in its internal functioning. It transforms the input voltage of 120 into 2000 volts. Thereby, it uses power in the range of about 3-50 watts, depending on the size of the bug trap.

In addition, many zappers now come with a rechargeable battery that can last for several hours in a single go. Many manufacturers offer these traps powered by solar energy coming from the sun for outdoor events.

Yes, they really work, and they work wonders if you want a safe and clean home.

They will ensure the maximum killing of bugs by luring them with their light and attractants. Moreover, you can use a repellent along with these zapping traps if you want to get rid of pest infestations in your surroundings.

The zapping traps can kill hundreds of unwanted parasites in a single night. You will be able to enjoy a peaceful night and can also have fun in your yard.